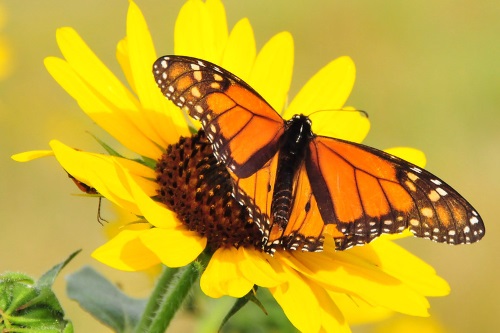 A “historic agreement” finalized between the U.S. Fish and Wildlife Service and the University of Illinois-Chicago on April 8 will encourage transportation and energy firms to voluntarily participate in Monarch Butterfly conservation by providing and maintaining habitat on potentially millions of acres of rights-of-way corridors on both public and private lands.

[Above photo by the USFW.]

The USFW noted in a statement that those are formal yet voluntary agreements between the agency and both public and private landowners to conserve habitats that benefit at-risk species and that it integrated both CCA and CCAA programs so energy and transportation partners and private landowners can provide conservation seamlessly throughout their properties, where there may be a mix of non-federal and federal lands.

A CCAA is for non-federal partners only and provides assurances to participants in the form of an “enhancement of survival permit” that no additional conservation measures will be required of them if the covered species later becomes listed under the Endangered Species Act (ESA).

The American Association of State Highway and Transportation Officials supported this effort in a two-page letter to the U.S. Department of the Interior on March 12; seeking “expedited approval” of voluntary national CCAAs to further encourage the creation of pollinator habitats in highway rights-of-way – especially the Monarch Butterfly.

“The regulatory protections provided by this CCAA allow transportation agencies to continue vegetation management practices with less concern that these actions will lead to an increase in the costs of regulatory compliance if the monarch is listed under the ESA,” the organization said in its letter.

“This decision gives state DOTs the ability to meet their highest priority to provide safe roads for the traveling public while simultaneously safeguarding the health of habitat for essential pollinators like the Monarch Butterfly,” he added.

The USFW said that agreement participants will carry out conservation measures to reduce or remove threats to the species and create and maintain habitat annually. And although this agreement specifically focuses on Monarch habitat, the conservation measures will also benefit several other species – especially pollinating insects.

“Completing this agreement is a huge boost for the conservation of Monarch butterflies and other pollinators on a landscape scale,” noted Aurelia Skipwith, USFW director, in a statement. “This is a great example of how … working proactively with our partners in the energy, transportation and agriculture industries to provide regulatory certainty for industry while addressing the conservation needs of our most at-risk species.”

“By engaging early in voluntary conservation, utilities and departments of transportation can avoid increased costs and operational delays as a result of a potential listing. This provides tremendous value to industry and will also yield big benefits to the Monarch Butterfly,” added Iris Caldwell, program manager of the University of Illinois-Chicago’s Energy Resources Center, which will administer the agreement.

“Not only is this the largest CCAA in history and completed on one of the fastest timelines thanks to our incredible partners, but it also represents an extraordinary collaboration between industry leaders and the U.S. Fish and Wildlife Service that can serve as a model for addressing challenges to other at-risk species,” Caldwell said.