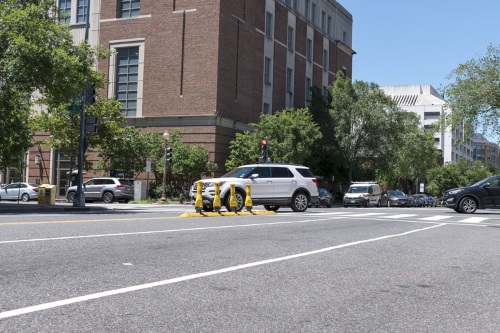 Bollards and rubber curbs that prevent drivers from cutting across intersections at a diagonal can make streets safer for pedestrians, according to a new study from the Insurance Institute for Highway Safety.

[Above photo by IIHS.]

The group said such “centerline hardening” forces drivers to turn more slowly at close to a right angle by blocking the diagonal path through the crosswalk. In Washington, D.C., such infrastructure changes reduced the number of times drivers had to swerve or brake suddenly or pedestrians had to dodge out of the way by 70 percent, according to Wen Hu, IIHS senior research transportation engineer and author of the study.

The calming infrastructure also resulted in a reduction in average left-turn speeds and decreased the odds that drivers made the turn at speeds exceeding 15 mph.

“This study suggests that simple infrastructure changes can deliver big benefits,” Hu explained in a statement. “Communities looking for ways to make pedestrians safer should add centerline hardening to their toolbox.”

The GHSA said that prediction is based on the number of pedestrian fatalities reported by state highway safety offices for the first six months of 2019, with that raw data adjusted based on historical trends.

In response, IIHS said states and cities across the United States have launched Vision Zero programs aimed at eliminating all such fatalities by passing laws aimed at curbing aggressive driving and by looking at ways to improve road designs.

The group’s study noted that just over half of all crashes involving pedestrians took place at intersections in 2018, resulting in more than 6,700 serious injuries to pedestrians and more than 1,500 pedestrian fatalities.

In one of the more common scenarios, a driver making a left turn crashes into a pedestrian crossing the road the driver is turning onto. Those left-turn crashes accounted for nearly a third of all pedestrian-involved crashes at intersections in 2018, Hu said.

“Our findings suggest that centerline hardening can be an effective tool alongside road diets, curb extensions, median islands and other measures that have been demonstrated to reduce risks for the most vulnerable road users,” she added.