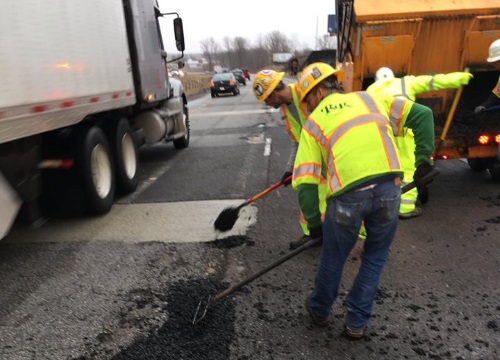 The Indiana Department of Transportation issued a total of $126.5 million in state matching funds on April 7 to 214 cities, towns, and counties to support a variety of local road projects via Indiana’s Next Level Roads strategy, originally implemented in mid-2017.

[Above photo by the Indiana DOT.]

“Our mission is to build and maintain Indiana’s transportation to grow our economy and enhance the quality of life in Indiana,” noted Joe McGuinness, the agency’s commissioner, in a statement. Through this program “we’re able to take that commitment to local roads, not just our highways. This sustained investment by the state makes sure that the Crossroads of America is maintained from the first mile to the last mile.”

In response to local requests to help manage project flow, the Indiana DOT said it now accepts grant applications in both January and July, with a $1 million cap annually per community. An estimated $100 million will be available for communities opting to apply during the July 2020 call for projects, the agency noted.

To qualify for funding via the Next Level Roads program, the Indiana DOT said local governments must provide local matching funds – 50 percent for larger communities or 25 percent for smaller communities – from a funding source approved for road and bridge construction and must also submit an agency-approved asset management plan for maintaining existing roads and bridges.

State law also requires annually that 50 percent of the available matching funds be awarded to communities within counties with a population of 50,000 or fewer, the Indiana DOT added.

In February, the agency issued $120.8 million worth of federal transportation funding to 52 cities, towns, and counties in rural portions of Indiana to support local road, bridge, and sidewalk projects.

Overall, Indiana aims to spend an estimated $10 billion on construction and maintenance of state highways over the next five years and more than $30 billion in the next 20 years via the Next Level Roads program. So far, since the program’s launch three years ago, the agency has disbursed $738 million in state matching funds for local transportation construction projects.