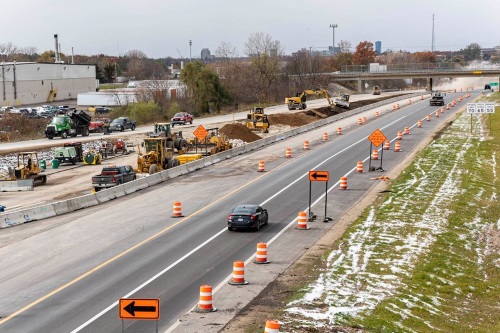 State departments of transportation across the country are grappling with a growing safety issue related to the start of National Work Zone Awareness Week (NWZAW) on April 20: more frequent incidences of speeding due to reduced traffic volumes resulting from COVID-19 stay-at-home orders.

The Governors Highway Safety Association noted on April 16 that emptier streets may be encouraging some drivers to flout traffic safety laws, including speed limits.

“Despite there being far fewer vehicles on the road due to COVID-19 stay-at-home orders, state highway safety officials across the country are seeing a severe spike in speeding,” noted Jonathan Adkins, GHSA’s executive director, in a statement. “Many states have reported alarming speed increases, with some noting a significant surge in vehicles clocked at 100 mph or more.”

According to the Federal Highway Administration’s most recent statistics, the total number of work zone crashes decreased by nearly 7 percent in 2018 – from 720 in 2017 to 671 in 2018 – while the number of year-over-year work zone fatalities decreased from 809 to 754.

Yet Mitzi Osterhout, COO and CFO of the American Traffic Safety Services Association, explained in an email exchange with the AASHTO Journal that while this decrease is positive, there is still much to be done.

That mantra is becoming even more critical to state DOT personnel such as Chris Brookes, work zone delivery engineer for the Michigan Department of Transportation.

“Despite the delay of some projects due to the pandemic, there are many active work zones throughout the state. Roads must be maintained. Bridges need to be inspected,” he explained in a statement. “It’s tempting to drive faster when traffic is light. But even with lower traffic volumes, it’s so important to slow down through these work zones for the safety of everyone.”

Brookes noted that data from around the state indicates that Michigan’s traffic volumes are down approximately 60 percent.

Dallas Hammit, state engineer and deputy director for transportation for the Arizona Department of Transportation, added in a statement that speed limits in work zones are reduced for the safety of both workers and drivers – even when traffic is light.

“There often are fewer lanes open, and drivers need to slow down so they can adjust to lane closures and other restrictions they aren’t used to,” he noted. “They also need to give themselves time to react if another driver changes lanes because they weren’t aware of a lane restriction.”

ATSSA’s Osterhout added that the theme for National Work Zone Appreciation Week this year is “We can do it! Safe Work Zones for All: Protect workers. Protect road users.”

The theme and poster are reminiscent of the World War II poster with Rosie the Riveter proclaiming “We can do it!”

“This year’s theme includes a similar call for people to come together in their efforts to be safe in work zones,” she noted.