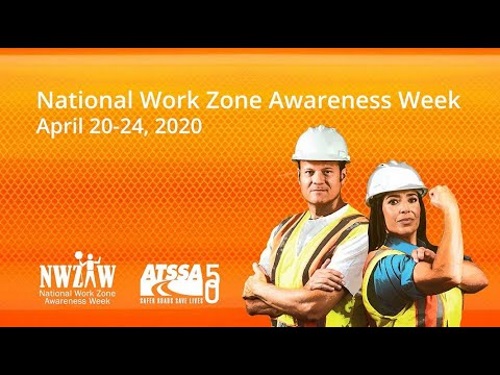 The annual National Work Zone Awareness Week focused on several areas for 2020: that four out of five work zone fatalities are actually motorists and/or their passengers, that speeding and distracted driving are the leading causes of work zone crashes, and that highway construction crews continue to push forward on transportation projects during the COVID-19 pandemic – meaning they are still exposed to danger despite lower traffic volumes due to the viral outbreak.

“While we all continue to do our part by staying home to protect communities from the spread of COVID-19, it’s important to remember that highway construction crews are still hard at work on projects to maintain our roads and bridges,” noted Nicole Nason, administrator of the Federal Highway Administration, in a statement.

“If you have to go out, please drive carefully through work zones so we can keep highway workers as well as first responders safe,” she said

[The Virginia Department of Transportation, which helped launch this event 20 years ago, put out a video highlighting the critical safety themes of National Work Zone Awareness Week.]

“Work zones are essentially the office spaces for thousands of individuals who work on our roadways, which is why it is crucial for motorists to use extra precautions in work zones and not drive distracted,” noted Shawn Wilson, secretary of the Louisiana Department of Transportation and Development, in a statement. “The spring and summer months are traditionally one of the busiest seasons for the construction industry and I want to encourage motorists to be on the lookout for crews, whether on the interstate or rural roads.”

According to the FHWA, in 2018 – the most recent year for which data are available – 754 people died in highway work-zone crashes. While that was down from the 799 deaths recorded for 2017 and 782 in 2016, some states are seeing spikes in both work zone crashes and fatalities.

For example, Ohio suffered 6,574 work zone crashes during 2019 – some 40 percent higher compared to 2018 – and Jack Marchbanks, director of the Ohio Department of Transportation, said the state is matching 2019’s work zone crash trend in 2020. The agency added that those 6,574 work zone crashes in 2019 resulted in 1,121 injuries – 129 of those being serious – and 16 deaths, including two construction workers.

“That’s an all-time record [and] it’s not a record we like to hold,” he said in a statement – adding that most of the work zone crashes are rear-end crashes caused by drivers traveling too fast or too closely to the vehicle in front of them.

The Rhode Island Department of Transportation noted its good fortune that no work zone deaths occurred over the last two consecutive years a despite the record number of roadway and bridge repair projects launched via the state’s RhodeWorks program.

However, though the COVID-19 pandemic sliced traffic volumes by 50 percent in Rhode Island, the agency said safety concerns remain as it has 300 maintenance workers engaged in 183 bridge construction efforts along with 56 other transportation projects.

“Each year we face the threat of workers being injured or killed by drivers crashing into work zones,” explained RIDOT Director Peter Alviti, Jr., in a statement. “Our construction workers are taking a chance every day when they step into their jobsite. [They are] literally risking their lives to improve our roads and bridges.”

To reduce such occurrences, the American Association of State Highway and Transportation Officials joined eight other organizations as signatories to a letter sent in December 2019 to Congressional committee leaders that seeks the allowance of federal funding for automated speed enforcement of work zones.

“Speed zone enforcement in work zones is effective at reducing speed, but when carried out by a law enforcement officer, that person is placed at risk, too,” the letter – authored by the National Safety Council – argued.

As part of its work zone awareness efforts, the Missouri Department of Transportation deployed a new tactic: a web page loaded with printable mazes, word games, a comic book, and coloring pages aimed at sharing its work zone safety messages with future motorists.

That dovetails with the Missouri DOT’s broader effort to “buckle up and put the phone down” as distracted driving remains a leading contributor to work zone crashes, while the best defense in a work zone crash, or any crash, is the use of a seat belt.

“Lives are at stake. Last year, 18 people were killed in Missouri work zone crashes,” explained Nicole Hood, the agency’s state highway safety and traffic engineer, in a statement. “When you make the decision to drive recklessly through a work zone, you’re unnecessarily putting yourself and our crews at risk.”