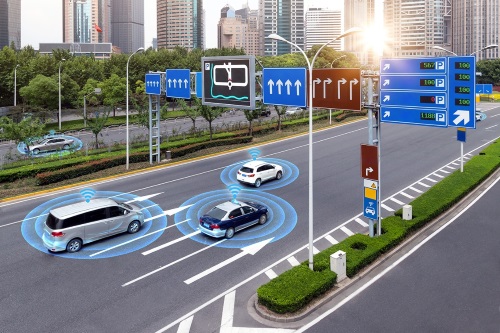 The Alliance for Automotive Innovation announced on April 23 that the automotive industry will deploying at least five million vehicle-to-everything or V2X devices on both vehicles and roadway infrastructure within the next five years.

[Above graphic by SAE International.]

That commitment that is predicated on the Federal Communications Commission maintaining the 5.9 gigahertz (GHz) wireless communication spectrum for transportation safety and permitting cellular V2X technology to operate alongside dedicated short range communication or DSRC technology.

“This commitment represents more than 50 times the number of devices on the road today,” noted John Bozzella, the group’s president and CEO, in a statement.

“This commitment by automakers clearly shows that these lifesaving technologies are ready and can be deployed in significant numbers in the next five years,” he added.

“This commitment, which includes previous V2X deployments, shows that the auto industry is aggressively working – along with other stakeholders – to dramatically increase utilization in the 5.9 GHz safety band,” Bozzella said. “Truly optimizing and achieving widespread deployment requires certainty that the entire 5.9 GHz band will be available.”

Jim Tymon, executive director of the American Association of State Highway and Transportation Officials, supported that effort in a separate statement and in an April 23 letter to the FCC as well.

“[The] pledge to install millions of connected vehicle devices in new passenger vehicles is a giant leap forward in the ongoing effort to improve highway safety,” he explained.

“This commitment complements the work being done by state departments of transportation to research and implement the roadside technology needed to connect those radios to the infrastructure around them,” Tymon noted.

“This connectivity holds the promise of saving countless lives by providing real-time information to drivers about road and weather conditions,” he said. “And it should serve to dispel any notion that the transportation industry will not use the entire 5.9 GHz spectrum for the safety and mobility purposes it was intended for.”

AASHTO had previously warned the FCC in a March 2 letter that allowing unlicensed devices to operate in the 5.9 GHz band is “wrong and misguided” and will “put future safety and mobility improvements” at risk.

In fact, in a separate follow up letter sent to the FCC, AASHTO noted that more than 85 percent of comments submitted as part of an FCC rulemaking effort initiated in December 2019  to open up the 5.9 GHz band objected to the proposed reallocation.

“Submittals universally highlighted safety as a top priority, many of them noting that if a proper cost/benefit analysis had been performed, the potential value of V2X far exceeds any economic value that a relatively small amount of additional Wi-Fi could provide,” AASHTO said in its letter.

The organization also noted that a U.S. Department of Transportation report issued in January found that “sharing” the 5.9 GHz spectrum with Wi-Fi providers “represents a consequential impact” to safety given that DSRC was designed to provide situational awareness in a safety zone defined by a 300-meter radius around a vehicle.

“Co-channel sharing with Wi-Fi or any unlicensed radio service with similar power and duty cycle as Wi-Fi will not be possible without a robust and reliable sharing mechanism that defers to the high priority safety messages,” AASHTO added in its letter. “Similarly, a reallocation of channels would need to provide guard bands to protect both radio services from adjacent channel interference from the other.”

In the end, AASHTO said the commitment by automakers to “build-out” connected vehicle technologies reflects a “watershed moment” for roadway safety.

“The commitment should dispel any notion that the transportation industry will not deploy connected vehicle technologies or that the full 75 MHz of the 5.9 GHz band will not be used,” the organization said. “The build-out commitment is a leap forward in realizing the FCC and USDOT’s joint vision for V2X, and will significantly advance U.S. global leadership in connected and autonomous vehicles.”