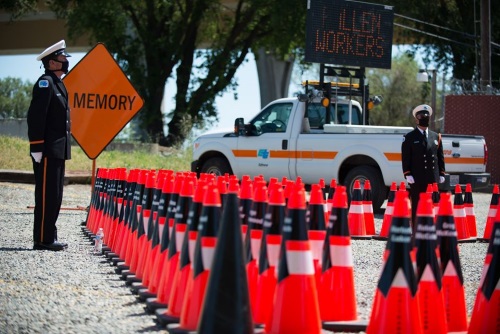 Several states participating in the annual National Work Zone Awareness week, April 20-24, took the opportunity to remember the men and women killed or injured while working on state roadways.

“We remain impassioned to honor our fallen heroes and their families this year, despite the physical distancing measures we are all taking.,” he said. “Regardless of the challenges we may face as a state, we must all pause to remember the sacrifices made by these individuals and their loved ones.”

Caltrans honored the lives of 189 highway workers who died over the last century during its 30th annual memorial near the Caltrans Workers Memorial Bridge on April 30; placing 189 orange traffic cones bearing the name of every worker lost since 1921 configured in a diamond shape to symbolize a highway caution sign.

A single black cone at the center of this formation signifies all workers lost on the state highway system, including private contractors and California Highway Patrol officers.

The Caltrans commemoration ceremony included two honor guards watching over that symbolic tribute, along with an agency truck equipped with an illuminated message sign reading “In Memory of Fallen Workers.”

Though the agency could not host any public events due to a statewide COVID-19 stay-at-home order, it lit the Interstate 35W bridge with orange light in observance of Worker Memorial Day.

“Hundreds of men and women are working on our roadways every day to improve our state’s transportation system,” said noted Margaret Anderson Kelliher, Minnesota’s DOT commissioner, in a statement. “All Minnesotans share in the responsibility of ensuring these dedicated workers make it home safely to their families at the end of the day.”

She added that, since 1960, 35 Minnesota DOT workers and 15 contractors have lost their lives while working on Minnesota highways.

The agency noted that it pays special tribute to the 62 employees lost in the line of duty by having their names etched onto the marble memorial outside its Denver headquarters.

“We will continue to honor the memory of our departed colleagues each and every year, no matter the circumstances,” said Shoshana Lew, Colorado DOT’s executive director, in a statement.

“And unfortunately, we again lost another CDOT team member last month after he was injured while doing his job on a state roadway,” she added. “We will never rest still until every one of our employees gets home safely to their families and loved ones.”