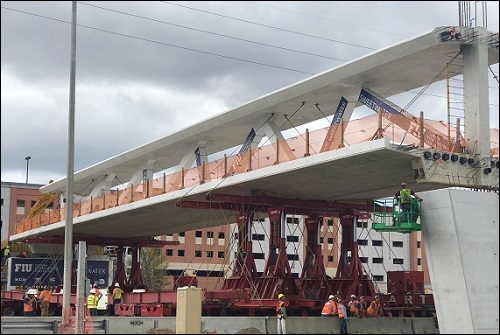 The Florida Department of Transportation unveiled plans on May 6 to design and build a replacement pedestrian bridge for the Florida International University; a structure spanning State Road (SR) 90/SW in Miami-Dade County to replace one that collapsed in 2018; a collapse that killed six people, injured 10 others, and crushed eight vehicles.

[Above photo of the old FIU bridge prior to its collapse.]

The agency said it will manage and oversee all aspects of the project in coordination with its local partners – including the City of Sweetwater and FIU – and that the new plans will incorporate “additional enhanced safety measures,” including recommendations stemming from a National Transportation Safety Board investigation of the original bridge’s failure.

The NTSB’s investigation determined that engineering errors were the probable causes of that fatal pedestrian bridge collapse two years ago; errors that caused the at-the-time partially constructed 174-foot-long, 950-ton FIU pedestrian bridge to crack and fall onto the street below.

The Florida DOT noted in a 2019 statement that it has already started implementing changes to its interactions with project sponsors and the processes the agency employs relating to major local agency program projects as a result of the NTSB’s investigation.

The agency added that design work on the new FIU pedestrian bridge will begin in early 2021 and is expected to last two years, with the construction of the replacement bridge itself to take roughly another two years to complete.