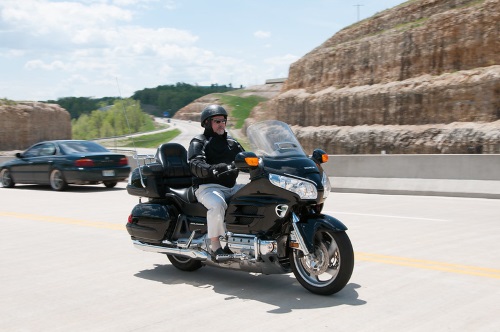 The Kentucky Office of Highway Safety – a division of the Kentucky Transportation Cabinet – and the National Highway Traffic Safety Administration are launching a “share the road” campaign in recognition of May as Motorcycle Safety Awareness Month.

KYTC noted that in 2018, there were 1,501 crashes involving motorcycles in Kentucky – resulting in 322 injuries and 88 deaths to motorcyclists, with 54 of those killed not wearing a helmet. Of those crashes, 803 involved a motorcycle and at least one other vehicle, while 698 involved only the motorcycle, the agency said.

“Safety is a mutual responsibility for motorists and motorcyclists alike,” said Governor Andy Beshear (D) in a statement. “We’re entering the warmer months and that typically means more drivers may operate motorcycles on our roadways. With more than 95,000 registered motorcycles in Kentucky, all road users must stay alert and look out for one another.”

“As one of the smallest vehicles on the road, a motorcycle may ‘hide’ in a vehicle’s blind spots, so we advise motorists to ‘look twice to save a life’ before changing lanes and making turns,” added Jim Gray, KYTC’s secretary.

According to NHTSA, per vehicle miles traveled, motorcyclists are approximately 28 times more likely than people in passenger cars to die in a traffic crash. Additionally, when motorcycles and other vehicles collide, it is usually the other non-motorcycle driver who violates the motorcyclist’s right-of-way, the agency said.