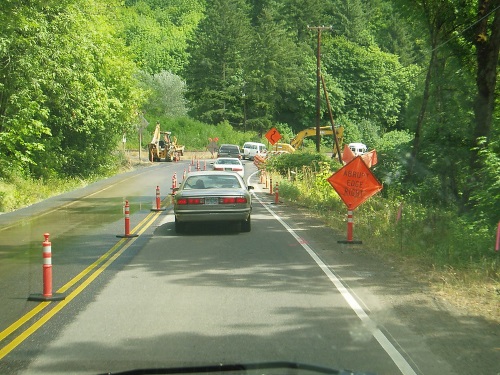 May is Work Zone Safety Month in Oregon and the Oregon Department of Transportation is launching a public awareness campaign to highlight it; especially as seasonal highway construction ramps up across the state.

“These types of injuries and deaths are preventable,” noted Troy Costales, Oregon DOT’s transportation safety division administrator, in a statement. “Most work zone crashes happen because drivers aren’t paying attention. Taking your eyes or your attention off the road for even a few seconds can have deadly consequences.”

He added that “distracted driving” causes the majority of those work zone crashes, followed by “speeding” and “driving too fast for conditions.”

To reduce the chances of highway workers being injured or killed in a work zone crash, the Oregon DOT began deploying automated flagging assistance devices or AFADs last year – dovetailing with a similar effort launched by the Washington State Department of Transportation.

Mike Salsgiver, executive director of Associated General Contractors Oregon-Columbia Chapter, added that even though the roads “may seem empty” as traffic volumes are way down due to the COVID-19 stay-at-home orders, they’re not.

“The highway construction industry in Oregon is continuing to work on badly needed projects to improve our roads and bridges and keep our state’s economy moving,” he explained. “With reduced traffic counts, these projects can be completed at an accelerated rate while our workers take all necessary precautions to stay safe and keep working. We encourage those driving on Oregon’s roads and highways to follow the speed limit and protect our workers.”