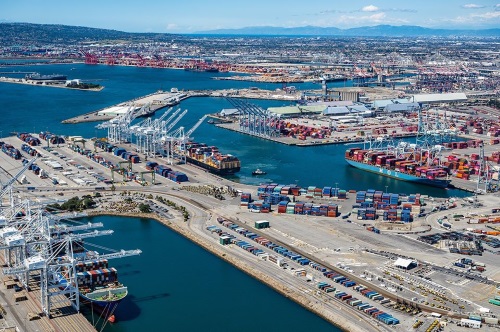 The U.S. Department of Transportation’s Build America Bureau said on May 4 it will provide a Transportation Infrastructure Finance and Innovation Act or TIFIA loan to the Port of Long Beach for up to $500 million to help finance construction of the Gerald Desmond Bridge Replacement Project, which is located at the Port of Long Beach at the southern end of State Route 710 in Los Angeles County.

[Above photo by the Port of Long Beach.]

The USDOT said this $500 million loan will replace a $325 million TIFIA loan which closed in 2014, but remains undrawn. The agency noted that it increased the principal amount of the loan to help the port pay for additional costs arising from the implementation of a more robust and longer-life bridge design. It added that the port plans to repay the loan through revenues generated by its operations.

The Gerald Desmond Bridge serves as the “primary link” between the ports of Long Beach and Los Angeles – the two largest container ports in the United States – and the warehouses and rail yards north of the ports, USDOT noted in a statement. It is also the primary connection between the communities of San Pedro and Long Beach, and connects residents to major employment centers.

This project aims to replace an outdated bridge originally build in 1968 with a cable-stayed bridge in order to accommodate increased vehicular traffic, provide emergency lanes in both directions, improve safety; and reduce delays. Its 205-foot vertical clearance will allow the port to accommodate larger cargo vessels as well, USDOT noted.

The agency added that this bridge replacement project is expected to be substantially completed in July of 2020, after which the existing structure will be demolished.

January 25, 1998: A Railway Station in France Opens in Time to Help with a Major World Sporting Event

In France, a new railway station was opened for service in the commune of Saint-Denis in the northern suburbs of Paris. This station, which is known as La Plaine-Stade de France, had been designed by architect Jean-Marie Duthilleul.