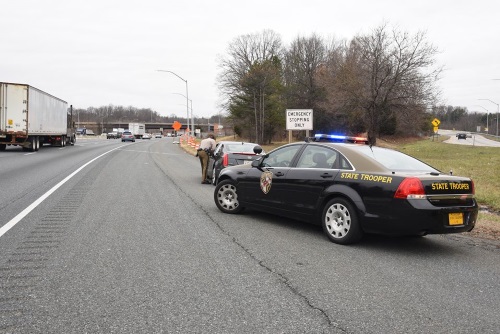 Efforts to emphasize seat belt use, the dangers of speeding, and greater motorcycle awareness are just some of the safety campaigns being initiated by state departments of transportation across the country.

[Above photo by the Maryland State Police.]

The Nebraska Department of Transportation’s Highway Safety Office, for one, is partnering with state and local law enforcement in a campaign that emphasizes that just as the COVID-19 pandemic made wearing a mask critical to reducing exposure and spread of the virus, wearing a seat belt is important in reducing motor vehicle injuries and fatalities.

The agency said that Nebraska averages one road fatality every day and a half and that of 66 percent of the 175 roadway fatalities that occurred statewide in 2018 were unbuckled. “Safety belts, when used, reduce the risk of fatal injury to front-seat passenger car occupants by 45 percent and light truck occupants by 60 percent,” noted Mark Segerstrom, Nebraska DOT’s HSO administrator, in a statement.

Meanwhile, the Missouri Coalition for Roadway Safety is joining with state and local law enforcement to conducts its annual “Click It or Ticket” campaign May 18-32 this year.

“Safety belts decrease your risk of dying in a crash by 45 percent,” said Nicole Hood, the Missouri Department of Transportation’s highway safety and traffic engineer, in a statement. “Last year alone, 880 lives were lost in Missouri crashes and 64 percent of those required to be restrained were not at the time of the crash. If everyone buckled up, hundreds of lives would be saved in Missouri each year.”

In related safety efforts, the Missouri DOT is also cautioning motorists to be aware of and slow down for mowing crews and highway line painting teams now being deployed in greater numbers for duty as the weather warms up.

To address an uptick in speeding, the Connecticut Department of Transportation and the Connecticut State Police are using messages displayed on electronic highway signs to get motorists to slow down during the COVID-19 pandemic.

The Connecticut DOT noted in a statement that while stay-at-home orders have sharply reduced highway traffic volumes, there’s been a spike in speeding incidences, as well as extreme and dangerously high speeds.

The agency noted that statewide data currently shows that during the month of April, at many locations, the percentage of drivers traveling faster than 80 mph has doubled – in some cases increasing as much as eight-fold – when compared to preceding months of 2020; including locations where the speed limit is 55 mph

In a related effort, the Maryland Department of Transportation and the Maryland State Police are working together to get the word out about the importance of maintaining safe speeds the during this COVID-19 health emergency.

“It is critical to keep our highways clear to provide a safe path for essential workers to get where they need to go efficiently and safely: first responders transporting sick individuals to the hospital, healthcare providers traveling to work and truckers keeping the supply chain moving delivering critical supplies to grocery stores, pharmacies and hospitals,” explained Greg Slater, Maryland DOT secretary, in a statement.

“We need to protect the safety of all these essential workers that we count on every day as we navigate this pandemic health crisis. Please avoid the temptation to speed on the unusual open road,” he added. “If you do need to travel, please do your part and slow down, park the phone, move over for first responders and buckle up – every seat, every time.”

Finally, May is Motorcycle Safety Awareness Month and several state DOTs are participating via a variety of traffic safety outreach campaigns.

The Mississippi Department of Transportation, for one, released a motorcycle safety tips video as part of its public education campaign in support of motorbike awareness

Meanwhile, the Maryland Department of Transportation Motor Vehicle Administration’s Highway Safety Office noted in a statement that failure to control speed and impaired riding are often factors in fatal motorcycle crashes. In many cases drivers of other vehicles contribute to fatal motorcycle crashes due to inattentiveness, impairment, or failing to yield to motorcyclists’ right of way.

The agency added that from January through April, crashes in Maryland involving motorcycles are down 10.6 percent – 214 compared to 238 for the same period in 2019 – even though overall vehicle traffic is down about 45 percent due to statewide COVID-19 stay-at-home orders.