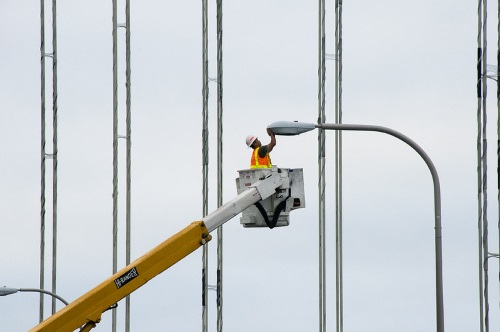 On May 26, the Oregon Department of Transportation started work on a project to convert more than 8,000 high-pressure sodium streetlights in the Portland area to light-emitting diode or LED fixtures – a change that should reduce the agency’s energy bill for street lighting in the Portland area by half, saving taxpayers $700,000 to $800,000 a year.

“We’re very excited to get this project under way in the Portland area because it will reduce carbon emissions, save taxpayers money and improve safety for Oregon DOT maintenance staff,” noted Rian Windsheimer, the agency’s manager for the Portland area, in a statement.

“This project is a win across the board,” Windsheimer said.

Most of the project work – which will continue intermittently through the summer of 2021 – will take place at night to minimize traffic impacts and will involve shoulder or single-lane closures, the Oregon DOT said, with some multiple-lane night closures in tunnels.

The agency added that most high-pressure sodium lights used in the Portland area today require maintenance every two to four years, but the new LED fixtures need replacing every 15 to 20 years. The longer lifecycle for each LED fixture also means less disruption to traffic created when maintenance workers replace lights.

Most of the new LED lights will have a color temperature of 3,000 Kelvin and will not shine any light above the fixtures – an effect considered to be “dark sky friendly.” A few locations, including Oregon DOT-maintained tunnels, will use 4,000 Kelvin fixtures, while the majority of bicycle and pedestrian pathway lighting will use 2,700 Kelvin fixtures, the agency said.

Other state departments of transportation are also engaged in similar lighting projects.

For example, the Virginia Department of Transportation contracted with Trane Commercial to replace more than 9,600 highway lights with LED technology in December 2019; a change expected to result in a cumulative net savings of $4.6 million by 2036 due to lower energy bills and reduced operations and maintenance costs for the agency.

Using a slightly different strategy, the Alaska Department of Transportation & Public Facilities uses a “lighting curfew” protocol developed three years ago to reduce the $2.2 million it spends annually to power 8,500 highway lighting fixtures, noting that late night and early morning hours account for 50 percent of the department’s electrical budget for lighting – times when less than 5 percent of the traffic is on the road.

Florida DOT to Speed Up Work on 40 Projects