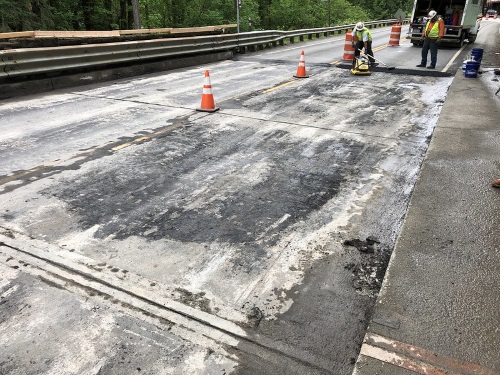 A hearing by the Senate’s Committee on Environment and Public Works delved into how transportation infrastructure funding not only can help the United States recover from the economic impact of the COVID-19 pandemic but provide more “social equity” by helping uplift communities through expanded access to better schools and better paying jobs.

[Above photo by the Washington State Department of Transportation.]

“As Congress considers what can be done to help the economy recover, funding our nation’s infrastructure should be at the top of the list,” emphasized Sen. John Barrasso, R-Wyo., the committee’s chairman, in his opening remarks.

“Investments in highways and bridges create jobs, reduce costs of goods and services, and grows the economy [and] the Senate has bipartisan legislation ready to go,” he said. “[Our] historic highway bill [passed in July 2019] authorizes $287 billion over five years from the Highway Trust Fund. It will provide record levels of investment to fix our roads and bridges, create jobs, boost our economy, and give states increased funding [with] the certainty they need for planning projects.”

Sen. Tom Carper, D-Del., the ranking member on the committee, noted in his opening comments that “infrastructure can be a part – a big part – of a greater multifaceted solution that brings equity and justice to all communities. Our roads, highway, bridges, railroads, and transit systems are not only important in moving all kinds of cargo across America as well as giving the American people the freedom to go where they want when they want but it also when done right helps uplift communities by expanding access to better schools and better paying jobs.”

The American Association of State Highway and Transportation Officials echoed that point of view in written testimony submitted to the committee.

“As we continue to work through the economic shock of the COVID-19 pandemic, Congress must take bold and historic action to revitalize our nation’s economy and secure our long-term future by enacting a robust, long-term surface transportation package that invests in highway, highway safety, transit, and passenger rail programs in every state and community across America,” the group said.

AASHTO added that, according to the U.S. Department of Transportation’s Conditions and Performance Report published in January, the nation’s total transportation system investment backlog in 2014 – the latest year available — stands at $902 billion, with a highway and bridge backlog of $786 billion and a transit backlog of $116 billion.

“This cumulative backlog – resulting from decades of underinvestment – represents all highway, bridge, and transit improvements that could be economically justified for immediate implementation,” the organization noted.

More critically, AASHTO reiterated the need for a nearly $50 billion funding “backstop” to help stave off the near- and long-term fiscal impact of COVID-19 pandemic on state DOT budgets.

“The requested revenue backstop is critically important to make sure that current transportation work, projects and activities can be stabilized without major disruptions,” the group noted. “State DOTs must receive the federal backstop in order to continue operations in the immediate weeks and months ahead. Without the backstop, the core capabilities of state DOTs will deteriorate and not allow them to be in a position to implement a much-needed, robustly funded reauthorization bill that, because of the leadership of this Committee, is pending in the Senate.”

Steve McGough – president and CFO of Houston-based construction software firm HCSS and chairman of the American Road & Transportation Builders Association – noted in his testimony that while the COVID-19 related economic decline that began in March presents a “generational challenge” for all Americans, “with that hardship comes a chance to chart a new course and create an economic resurgence” with infrastructure at its core.

“There are few public sector actions that can deliver the same level of short- and long-term economic benefits as transportation infrastructure investment,” he explained. “Increased construction activity provides immediate job creation and retention, while putting in place capital assets that support supply chain improvements and enable access to jobs, services, materials and markets for decades.”

Doug Holtz-Eakin, president of the American Action Forum, emphasized those points during his testimony; noting in particular that the economic fallout of the COVID-19 pandemic is “staggering and unprecedented in our lifetimes” with higher-frequency data revealing a “historically-devastated economy.”

He said payrolls in April fell by 20.5 million, with private sector payrolls shedding 19.5 million jobs and the service sector losing over 17 million jobs. “The unemployment rate jumped to 14.7 percent, which exceeds the highest level since the Great Depression,” Holtz-Eakin added. “As the Bureau of Labor Statistics notes, were it not for the classification of some workers as employed but ‘absent for other reasons,’ this number would be on the order of 5 percentage points higher.

He emphasized that “this is where infrastructure investment can be of direct assistance” to the nation’s economic recovery.

“The Congressional Budget Office anticipates that for the entire year 2020, gross domestic product will be down 5.6 percent as every component of spending declined except federal government purchases and that elevated levels of unemployment through 2021,” Holtz-Eakin said. “A well-designed infrastructure effort can begin to provide economic benefits at roughly this point in the recovery.”

Greg Fischer – mayor of Louisville, KY, and the incoming president of the U.S. Conference of Mayors – added in his testimony that such infrastructure investment would also play “a really big role to promote equitable economic growth” especially in minority communities.

“This is a tremendous opportunity to show power of citizen’s money at work,” he explained. “Consistent infrastructure funding year after year would allow creation of more minority businesses and give them more opportunity and certainty to move forward and employ local workers. These are good jobs. No question there is an equity overlay on this.”

Fischer also pointed out that that “culture shift” when it comes to how the country’s citizens view infrastructure investments is needed as well.

“For many years now, we’ve wanted everything but don’t want to pay anything.,” he said. “So as we talk about the money, we need to talk about how proud we should be in what we are building; creating a portfolio of diversified and sustainable funding surrounded by an umbrella of pride that shows how proud Americans are of the infrastructure we build.”