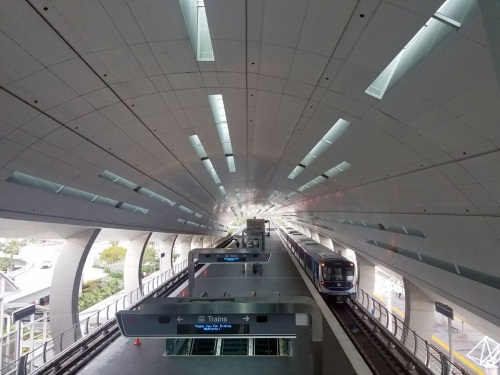 The Federal Transit Administration issued a total of $891 million in Capital Investment Grants or CIGs to 12 transit infrastructure projects across the country on May 29, followed by $130 million in grants on June 2 through its Low- or No-Emission (Low-No) grant program to support the purchase or lease of zero-emission and low-emission transit buses as well as supporting facilities.

The FTA said in a statement that the CIG infrastructure awards will be used to advance the readiness of projects for a construction grant agreement or a Full Funding Grant Agreement.

One project being funded by this round of CIG awards is Milwaukee’s East West Bus Rapid Transit or BRT program, which is getting $40.9 million.

BRT systems brings a much higher level of service and modernity than traditional bus service, explained Craig Thompson, secretary–designee of the Wisconsin Department of Transportation; a service featuring real-time arrival signs and dedicated lanes that “make it feel more like a train on wheels” while helping reduce traffic congestion.

“The announcement of a $40.9 million grant to Milwaukee County for its Bus Rapid Transit Program is tremendous news for the entire state of Wisconsin,” he said in a statement. “This critical 9-mile corridor serves the Milwaukee Regional Medical Center and connects downtown Milwaukee with Wauwatosa and Marquette University. The service is estimated to have more than 9,500 daily users by 2035 and increase overall transit ridership by 17 percent.”

Meanwhile, the FTA noted in a separate statement that the $130 million in new Low-No grants will support 41 projects in 40 states and the District of Columbia to purchase buses powered by hydrogen fuel cells or battery electric engines, as well as construct related infrastructure such as electric charging stations.