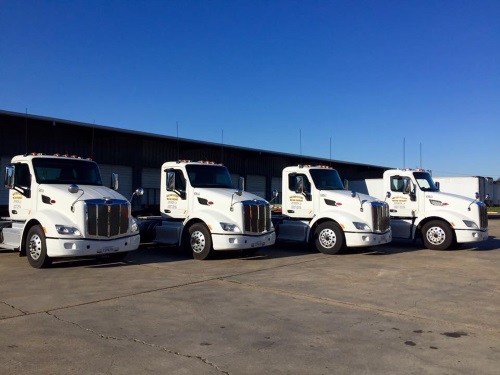 The commercial trucking industry is calling for short-term infusion of revenue that will allow states to avoid furloughs, maintain capital investment schedules, and save thousands of jobs as the fiscal impact on state transportation budgets continues to be felt in the wake of the COVID-19 pandemic.

[Above photo by Southeastern Motor Freight.]

Randy Guillot – president of Triple G Express and Southeastern Motor Freight and chairman of the American Trucking Associations – noted in his testimony before the Senate Committee on Commerce, Science, and Transportation on June 3 that federal and state user transportation fee revenue could be depleted by at least $32 billion over the next year due to a steep falloff in motor vehicle travel due to COVID-19.

“This does not include losses to states that rely on retail sales tax revenue for their transportation budgets,” he added. “This loss of revenue will force cancellation of critical transportation projects, putting more than 400,000 people out of work. Furthermore, it will accelerate the insolvency of the federal Highway Trust Fund, which was previously projected by the Congressional Budget Office to begin to go into the red by fiscal year 2021.”

For that reason, Guillot said ATA supports a short-term infusion of revenue that will allow states to avoid furloughs and to maintain capital investment schedules, thereby saving thousands of jobs.

“We also urge Congress to avoid delays in reauthorization of the FAST [Fixing America’s Surface Transportation] Act, and ensure that the surface transportation program is provided with sufficient long-term revenue to address critical infrastructure deficiencies,” he pointed out.

“Even before the current crisis, a severe lack of investment has caused the road system to rapidly deteriorate, costing the average motorist nearly $1,600 a year in higher maintenance and congestion expenses. Highway congestion also adds nearly $75 billion to the cost of freight transportation each year,” Guillot explained.

He added that, in 2016, truck drivers sat in traffic for nearly 1.2 billion hours – equivalent to more than 425,000 drivers sitting idle for a year. “This caused the trucking industry to consume an additional 6.87 billion gallons of fuel in 2016, representing approximately 13 percent of the industry’s fuel consumption, and resulting in 67.3 million metric tons of excess carbon dioxide emissions,” Guillot said.

That’s why the current situation in regards to the COVID-19 roadway travel declines “represents the greatest opportunity in decades to make great strides toward addressing these challenges,” he explained. “With traffic down – allowing for more lane closures – unemployment at historic highs, and interest rates and fuel prices at historic lows, now is the perfect time to accelerate transportation projects, not starve them of revenue.”

Guillot added that transportation infrastructure investment offers “a singular solution” to the tangled web of policy challenges woven by COVID-19. “It would generate powerful economic stimulus in the near term, providing hundreds of thousands of good-paying, private sector jobs,” he emphasized. “It would lay a strong foundation for long-term economic growth, strengthening our supply chain and securing America’s preeminent position in the global economy.”