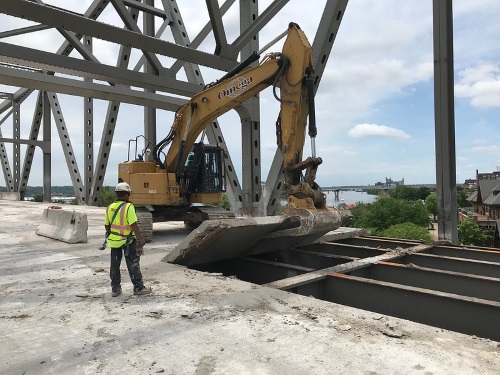 While a new survey by the Associated General Contractors of America, along with data from construction technology firm Procore, indicates that overall construction activity is returning to pre-COVID-19 levels in many parts of the country, many transportation infrastructure projects are being delayed or cancelled outright due to declines in state revenues caused by the pandemic.

“We heard early on during the pandemic that states like Florida were encouraging [highway] contractors to work more hours and closed more lanes on heavily-used roads due to lower traffic volumes,” explained Ken Simonson, AGC’s chief economist, during a conference call with reporters.

“But that was offset by states such as Pennsylvania which shut down everything during the first few weeks of the pandemic,” he pointed out. “That’s now being replaced by many states going, ‘Wow, look at the huge drop in fuel tax and toll road receipts.’ That is forcing many states to postpone or cancel projects that they were planning to put out for bid.”

“We did see the transportation sector get hit hard very early on in the pandemic, followed by a decent uptick of not just road work but an acceleration of other projects, notably transit,” he said.

“But now we are again seeing a slowdown in worker hours in the transportation space as projects that were expected to be let are not being let or not starting at all,” Lengieza added. “Also, with more motorists now getting back on road, it is no longer easy to shut down extra lanes to increase project work.”

That is why AGC’s Simonson said it is so important for Congress to act on the $50 billion funding “backstop” request by state departments of transportation to make up for that lost revenue, as well as assure a five-year surface transportation funding bill is reauthorized; one that includes a substantial fiscal boost alongside a “lessening of strings” that prevent projects from getting started.

“We really need to see both of those pieces of legislation get done in the next few weeks to keep construction contractors from laying off more employees,” he emphasized.

Simonson noted that fiscal support for state DOTs would come at a critical juncture as construction activity has returned to pre-COVID-19 levels in 34 states, according to AGC’s survey. Furthermore, only 8 percent of construction firms were forced to furlough or lay off workers in June while 21 percent report adding employees, compared to one-in-four firms letting workers go between March and May.

Simonson added that, moving forward, 12 percent of firms report they plan to furlough or lay off staff over the next four weeks while 17 percent anticipate adding to their headcount during that time span.

Yet even as more construction firms predict they will expand during the next several weeks, 42 percent do not expect demand will recover to normal levels for at least four months, and most of those firms expect recovery will take longer than six months.

He also noted that construction firms are counting on additional federal help to improve demand for construction and make it easier to return people to their payrolls, with 33 percent counting on Congress to boost infrastructure spending to offset declining private-sector demand.