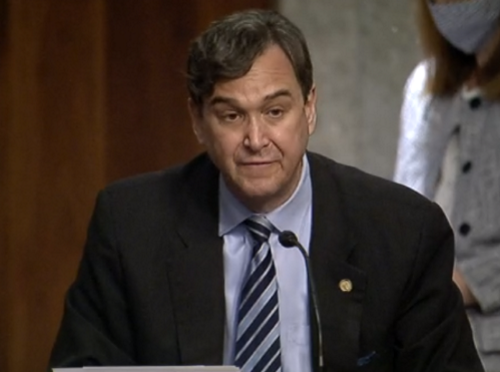 In testimony before the Senate Committee on Commerce, Science, and Transportation on June 16, Joel Szabat (seen above) – nominee for Under Secretary of Transportation for Policy at U.S. Department of Transportation – highlighted key current and future focus areas for the agency.

Those “focus areas” include autonomous vehicle testing and the preservation of the 5.9 gigahertz wireless communication spectrum for transportation needs.

“A priority of mine, in support of Secretary [Elaine] Chao’s vision, is to continue to work to safely integrate emerging technologies, including drones and other autonomous vehicles, into our existing national aviation and surface transportation networks,” he explained in his testimony during the nomination hearing.

“We are in the process of endorsing a standardized list of advanced driver assistance systems terminologies this year through the ‘Clearing the Confusion’ initiative,” Szabat added. “By the end of this year we will release the fourth iteration of our autonomous vehicle federal guidance.”

To that end, the USDOT noted in a statement on June 15 that nine companies and eight states agreed to be the first participants in a new program designed to improve the safety and testing transparency of automated driving systems.

Dubbed that Automated Vehicle Transparency and Engagement for Safe Testing or “AV TEST Initiative,” this voluntary program is designed to provide an online, public-facing platform for sharing automated driving systems testing activities and other safety-related information with the public, USDOT said – noting that online mapping tools may show testing locations at the local, state, and national levels, as well as testing activity data, which may include dates, frequency, vehicle counts, and routes.

“As technology rapidly alters the face of transportation it is our duty to keep pace,” Szabat emphasized. “Nobody yet knows what the ‘new normal’ will be, when the threat of the coronavirus recedes. Changes in how we live and work will also drive changes in transportation. [That’s why] the Office of the Under Secretary oversees or coordinates the work of hundreds of outstanding research scientists, engineers, statisticians and economists [who] are already looking into what changes might emerge, so we are better prepared for them if they do.”

He also noted that the USDOT’s Office of Research and Technology is taking a “lead role” in securing transportation communication needs.

“In that capacity, we recommended against the introduction of new broadband that would interfere with the Global Positioning Satellite system and tested 11 potential backup technologies,” Szabat said. “We have also advocated for the preservation of the 5.9 Ghz ‘Transportation Safety Band’ to allow for the emergence of new technologies, with a plan to deploy connected vehicle technology in 5 million vehicles in five years.”

The preservation of that “safety band” has been a key goal of the American Association of State Highway and Transportation Officials as well.

AASHTO warned the Federal Communications Commission in a March 2 letter that permitting unlicensed devices to operate in the 5.9 GHz spectrum is “wrong and misguided” and will “put future safety and mobility improvements” at risk.