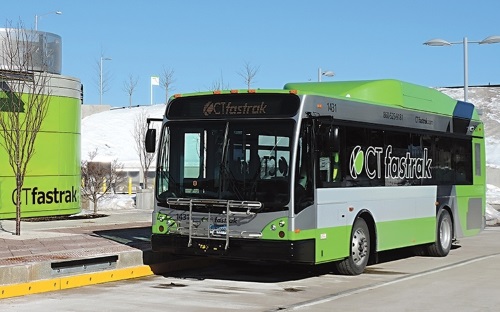 The Connecticut Department of Transportation plans to use $2 million of more than $37 million in recently received federal grant awards to pilot test buses equipped with automated vehicle technology via its CTfastrak bus rapid transit or BRT corridor between New Britain and Hartford.

[Above photo by CTfastrak.]

The agency said in a statement that its automated technologies demonstration will include steering, precision docking at CTfastrak station platforms, and platooning – all of which can enhance service and improve safety for drivers and passengers, it noted.

The Connecticut DOT stressed that those buses will only operate in “automated mode” on the CTfastrak separated guideway and will always have a driver behind the wheel to take control if necessary.

An operator will manually drive the buses on downtown Hartford’s mixed-traffic roadways, it said, while autonomous “precision docking” at station platforms will be performed only at low speeds. Extensive testing using an off-road test facility will occur first, then on empty CTfastrak buses, prior to launching the demonstration, the agency added.

The agency noted that the rest of its grant money will fund a variety of other projects, including: