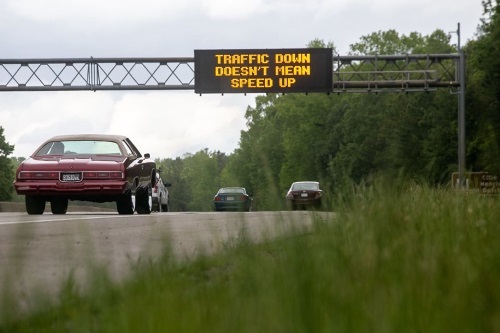 “We are alarmed by the increase in Missouri traffic fatalities, particularly since they occurred with reduced traffic due to the statewide stay at home order,” said Gov. Mike Parson (R) in a statement. “Despite traffic volumes in the state dropping by nearly 50 percent for much of the year, traffic fatalities in Missouri are up 12 percent compared to 2019.”

Missouri has already experience 402 traffic fatalities since the start of 2020; an increase of 43 more lives lost compared to the same time period in 2019, the Missouri DOT noted, with the “100 Deadliest Days of Summer” just beginning.

“We’re dealing with a different kind of public health crisis,” noted Patrick McKenna, director of the Missouri DOT. “During the pandemic, we see people wearing masks and social distancing, not only for their own protection, but for the health of others. We need a similar commitment from drivers to buckle their seatbelts, put their phones down, and slow down.”

[Editor’s note: McKenna made reducing roadway fatalities one of the key emphasis areas of his one-year term as president of the American Association of State Highway and Transportation Officials.]

Similarly, though fewer motor vehicles were on Virginia’s roads during the state’s roughly three-month COVID-19 lockdown – contributing to a 45 percent decrease in all motor vehicle crashes – the number of fatalities involving both speed and lack of seat-belt use increased by 78 percent during that time period compared to 2019.

According to preliminary data released by the Virginia Department of Motor Vehicles, from March 13 through May 21, speed-related fatalities made up about 50 percent of the state’s overall motor vehicle fatalities; higher than the 42 percent during the same time frame in 2019.

Of the 58 speed-related fatalities recorded during that roughly three-month period, 41 or 70 percent were not wearing seat belts, the agency said. Additionally, unrestrained fatalities for the calendar year through May 21 increased approximately 15.4 percent as well: 120 deaths in 2020 versus 104 in 2019.

Those numbers dovetail with recent analysis by the Governors Highway Safety Association, which highlighted a severe spike in speeding and other reckless driving behavior across the country in the midst of the COVID-19 pandemic.

“We are urging all motorists to drive the posted speed limit and wear seat belts,” noted Shannon Valentine, Virginia’s secretary of transportation, in a statement.

Other state departments of transportation have helped initiate efforts over the last several months to battling similar scenarios on their roadways.

For example, the California Department of Transportation began working with the California Highway Patrol and the California Office of Traffic Safety in April to find ways to get motorists to slow down given a recent 87 percent spike in citations for speeding in excess of 100 mph.

The Nebraska Department of Transportation and the Nebraska State Patrol joined forces in April to combat the same problem as state troopers issued 100 citations statewide for speeding in excess of 100 mph between March 18 and mid-April compared to 61 citations during the same period in 2019.