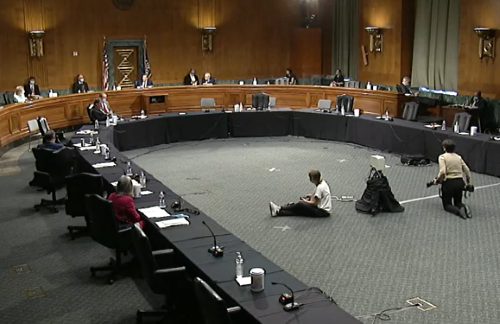 The steep drop in traffic volumes caused by the COVID-19 pandemic is pushing the Highway Trust Fund closer to insolvency faster than projected, according to comments made during a Senate Committee on Environment and Public Works hearing on July 1.

That decline in traffic volumes also significantly reduced motor fuel tax and toll receipt revenues, creating a huge gap in state department of transportation budgets across the country that may take years to close.

Those are just two reasons why Sen. John Barrasso, R-Wyo., chairman of EPW committee, explained in his opening remarks at the hearing that surface transportation reauthorization legislation must be passed soon in order to stave off major fiscal problems down the road.

“Three months from today, the [current] surface transportation authorization will expire. This cannot be allowed to happen – especially during this pandemic-caused economic downturn,” he explained.

Ranking Member Sen. Tom Carper, D-Del., added in his opening statement that “every member of our committee knows that America’s transportation infrastructure is essential to our economy, to our society, and to our way of life” but that many of the more than four million miles of roadway and 600,000 bridges across the country are in “desperate” need of repair.

“Whether you’re driving an 18-wheeler truck hundreds of miles a day on interstates across the Heartland, or hitting pot holes on your way to work or the grocery store, just about every driver in America will agree that our surface transportation infrastructure needs work. A lot of it,” Sen. Carper said. “While some roads simply need repairs or repaving, others need to be rebuilt or completely redesigned. According to the U.S. Department of Transportation, approximately 20 percent of our federal-aid highways are in poor condition, as are some 46,000 bridges.”

The American Association of State Highway and Transportation Officials added in a statement submitted to the EPW committee that, on top of those overall system needs, state governments are facing tremendous revenue reductions from “stay at home” orders.

And as the economic re-opening around the country proceeds slowly, “we expect it will take several years before state DOT revenues reach pre-pandemic levels,” AASHTO said – which is why the $49.95 billion “backstop” the organization requested from Congress back in April is so critical.

That fiscal backstop is crucial for state DOTs “in order to prevent major disruptions in their ability to operate and maintain their transportation systems during this national emergency,” AASHTO said.

Robert Lanham Jr. – president Williams Brothers Construction Co., Inc., and testifying on behalf of the Associated General Contractors of America – highlighted similar concerns in his comments at the hearing.

“Just as we have seen with many other types of businesses during this crisis, construction businesses cannot survive months at a time without work,” Lanham stressed.

That’s why he believes enactment of “robust, multi-year surface transportation reauthorization legislation” will not only provide the long-term certainty state DOTs need to plan and carry out the critical improvements to transportation system, “it will also provide a signification economic boost to our nation at a time when it is desperately needed.”

Jason Grumet, founder and president of the Bipartisan Policy Center, urged the Senate to pursue opportunities to further streamline the federal permitting process for transportation projects during his testimony at the hearing.

“The federal government’s online permitting dashboard lists over 60 possible permits and other approvals that infrastructure projects may require from 12 different federal departments – separate and apart from environmental reviews under the National Environmental Policy Act,” he pointed out.

As a result, Grumet noted that the “complexity of current U.S. permitting processes” leaves “substantial opportunities” for improvement that would increase predictability, shorten the time to project delivery, and reduce costs while still providing for “robust consideration of public and environmental concerns.”