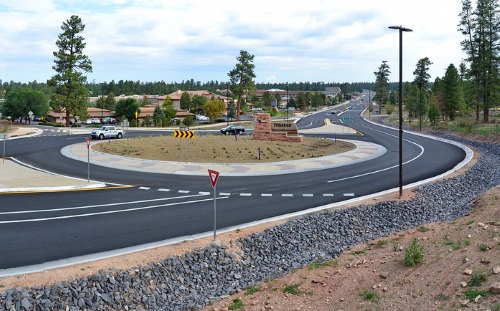 The Transportation Research Board noted that a recent National Cooperative Highway Program analysis of roundabout intersections finds that while improved safety is their main benefit, roundabouts may also be a less expensive option as well as a way to make better use of space at roadway intersections.

That new NCHRP report – entitled Design Guidance for High-Speed to Low-Speed Transitions Zones for Rural Highways – also found that roundabout intersections, particularly those with only one lane in each direction, reduce the complex decisions drivers, pedestrians, and cyclists must make in navigating traffic, leading to fewer crashes and less severity of injuries when crashes do happen.

While their existence doesn’t automatically lead to lower average speeds, TRB noted in a recent blog post that research also indicated roundabouts can be effective in improving speed-limit compliance by 15 percent to 20 percent, even at the end of the rounded intersection’s “transition area.”

However, designing roundabouts with more lanes than needed can actually degrade the safety performance, TRB noted, with higher posted speed limits within the roundabout related to increased crash severity.

Though the emergence of roundabout intersections – also known as traffic circles – still feels “relatively new” in the United States, a previous NCHRP report called Roundabout Practices found that the use of “rounded intersections” is growing across the country.

TRB noted that in the late 1990s, only nine state agencies reported a roundabout in operation, but that grew to 38 states by 2016.