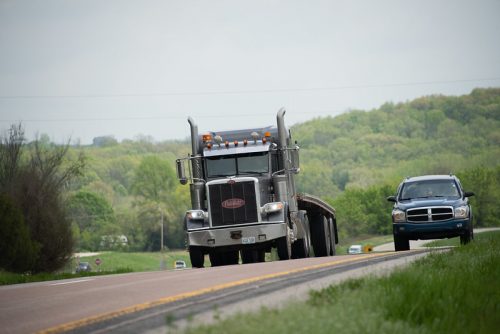 That report – entitled Restoring the Interstate Highway System: Meeting America’s Transportation Needs with a Reliable, Safe & Well-Maintained National Highway Network and published by the nonprofit transportation research firm TRIP –  found that pavements on 11 percent of interstate highways are in poor or mediocre condition, while 27 percent of interstate bridges are in need of repair or replacement.

On top of that, TRIP’s analysis indicated that, 47 percent of urban interstate highways are considered congested during peak hours.

Concurrently, the report noted that travel by commercial tractor-trailers on the interstate system increased 45 percent from 2000 to 2018, which is nearly double the 25 percent rate of travel growth for all vehicle travel during the same period. TRIP noted in a 37-page report issued in October 2019 that  freight moved annually in the United States by commercial trucks is expected to increase 91 percent in inflation-adjusted dollar value by 2045 and 44 percent by weight.

[To give those percentages perspective, a separate report compiled by the American Trucking Associations noted that the U.S. trucking industry moved 11.84 billion tons of freight in 2019, generating $791.7 billion in revenue. Also, according to ATA’s data, commercial trucks moved 67.7 percent of all surface freight between the United States and Canada along with 83.1 percent of cross-border trade with Mexico; together totaling of $772 billion worth of goods.]

TRIP’s report also drew upon a consensus study issued by the National Academies of Sciences, Engineering, and Medicine in December 2018 that recommended investment in the nation’s interstate system be boosted approximately two-and-a-half times from current levels – from $23 billion in 2018 to $57 billion annually over the next 20 years – funded by a near-term increase in federal motor fuel taxes indexed to inflation (and accounting improvements in vehicle fuel mileage) alongside a long-term changeover to tolling and vehicle miles traveled or VMT fees.

“In order to rebuild the nation’s economy, maintain personal and commercial mobility, and improve quality of life, adequate transportation investment and a sustainable, long-term funding source for the federal surface transportation program must remain a priority,” he said.

TRP’s report also stressed that the ability of the states to invest in Interstate highway repairs and improvements is being hampered by the tremendous decrease in vehicle travel that has occurred due to the COVID-19 pandemic; a decline that is estimated to reduce state transportation revenues by at least 30 percent – approximately $50 billion – over the next 18 months.