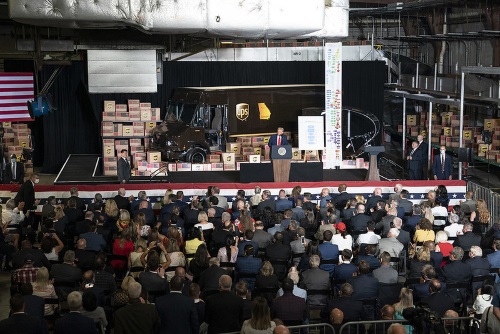 “The final rule will make the NEPA process more efficient and effective, ensure consideration of environmental impacts of major projects and activities, and result in more timely decisions that support the development of modern, resilient infrastructure,” explained Mary Neumayr, the CEQ’s chairman, in a statement.

Signed into law in 1970, the CEQ noted that NEPA rules require federal agencies to assess the potential environmental impacts of proposed major federal actions and that the NEPA process can apply to a variety of activities, including transportation infrastructure projects such as the construction of roads, bridges, highways, public transit, and airports.

The agency said the reason for the NEPA overhaul – which has been in the works since 2018 – is that the average length of an environmental impact statement is more than 600 pages, with the average time required for federal agencies to complete NEPA reviews now four and a half years. The CEQ added that NEPA reviews for highway projects currently take more than seven years, and in some cases take a decade or more, to complete and are also the most litigated area of environmental law.

The agency added that the modernization of NEPA regulations also incorporate key elements of the Trump Administration’s One Federal Decision policy, which includes a two-year goal for completing environmental reviews.

President Trump himself highlighted the NEPA overhaul during a press event July 15 at the United Parcel Service Hapeville Airport Hub in Atlanta.

“For decades, the single biggest obstacle to building a modern transportation system has been the mountains and mountains of bureaucratic red tape in Washington, D.C.,” the president said in his remarks. “At the same time, we’ll maintain America’s gold standard environmental protections.”

“[This is] another environmental process improvement that will make life much easier for people like us at [state] departments of transportation across the nation,” noted Russell McMurry, commissioner of Georgia Department of Transportation, at the event.

The NEPA overhaul will also help “to deliver infrastructure projects like the I-75 commercial vehicle lanes, to move that freight out of Savannah to Atlanta and beyond, while providing a safe corridor for the many families that travel on I-75,” McMurry added.

Some Congressional leaders and environmental organizations, however, expressed concern over the long-term impact of the administration’s revision of NEPA regulations.

“The NEPA process is critical to accounting for the impacts of climate change when considering federally funded infrastructure projects,” noted Rep. Peter DeFazio, D-Ore., chairman of the House of Representatives Committee on Transportation and Infrastructure in a statement.

“Ignoring those impacts is a mistake will result in limited taxpayer dollars being spent on projects that cannot withstand future storms and other impacts of climate change,” he added.

Narrow Runoff Victories in Georgia Give Senate to Democrats