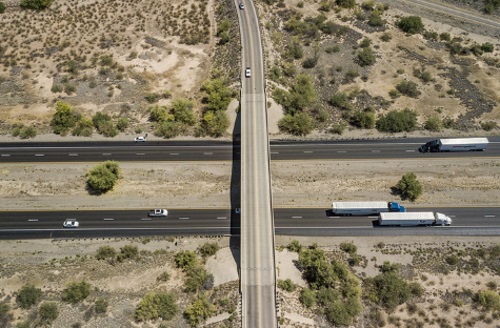 The Arizona Department of Transportation is seeking input to inform potential public-private partnerships for installing and/or operating broadband conduit along major interstate and state highway routes.

Coordinating with the Arizona Commerce Authority, the agency said it is “exploring partnerships” that would lead to the development of fiber-optic infrastructure across the state; creating more affordable opportunities for wired and wireless broadband connectivity in rural communities.

In addition to the benefits to rural broadband connectivity, the Arizona DOT said it plans to use the fiber to provide “smart highway” technology such as overhead message boards, traffic cameras, weather stations and wrong-way driving detection technology – infrastructure that also will help lay the groundwork for emerging technology such as connected and automated vehicles.

“Expanding fiber-optic connectivity along these corridors makes our highways safer and smarter while offering the potential for partners to help make rural Arizona a better place to live and do business,” noted John Halikowski, the agency’s director, in a statement.

InnovateOhio, in partnership with the Ohio Department of Transportation, issued a 16-page broadband access report in September 2019 – a report commissioned at the behest of Ohio Governor Mike DeWine (R) – to provide a strategic plan for “improving and expanding broadband” across the state. The key finding of that report is that the rights-of-way along state-owned interstate highways “hold considerable value” that can be “leveraged in order to expand broadband.”

Arizona and Ohio’s efforts are part of a longer-term national trend to co-locate broadband assets along highway rights-of-way.

While states do not support a strict federal preemption on how states can manage broadband deployment on their own properties, Carlos Braceras – executive director of the Utah Department of Transportation and the 2018-2019 president of the American Association of State Highway and Transportation Officials – noted in Congressional testimony that speeding up the federal permitting process for high-speed broadband deployment, especially in rural areas, would in turn facilitate “the merger of technology between motor vehicles and infrastructure,” leading to greater mobility and increased safety on the nation’s roads.