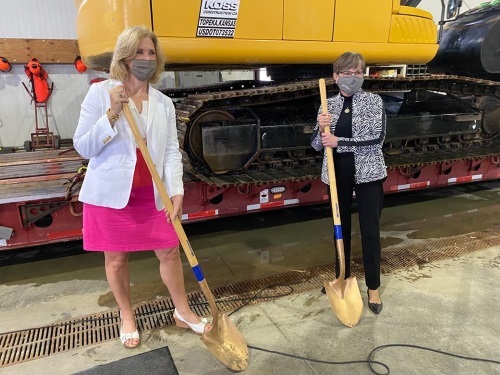 Julie Lorenz, secretary of the Kansas Department of Transportation (at left in above photo), joined Kansas Governor Laura Kelly (D) (at right in photo) on July 20 to officially “break ground” on a long-delayed U.S. 50 highway expansion project.

[Above photo via the Kansas DOT.]

Concurrently, the Kansas DOT said it plans to distribute $18.5 million over a two-year period via its City Connecting Link Improvement Program (CCLIP) to fund 36 projects making improvements to state highways that extend through cities.

“Transportation investments don’t just create short-term construction jobs, they have the ability to change the long-term economic outcomes for communities that have lost population and businesses,” noted Gov. Kelly in a statement. “Because of our commitment to fiscal responsibility, we will not only be able to restore what we’ve lost, but also to make new investments that will deliver the future Kansans deserve.”

The $7.8 million U.S. 50 highway project will widen it to four lanes for one mile – a stretch that carries the most truck traffic of any two-lane highway in Kansas – and improve intersections along that expanse as well.

The governor’s office said the U.S. 50 project was originally going to be addressed via the state’s previous transportation program, T-WORKS, but got delayed in 2016 due to lack of funding. It will now be funded through the Eisenhower Transportation Legacy or IKE program; approved by the state legislature and signed into law in early April.

Meanwhile, the 36 projects the Kansas DOT plans to fund through its CCLIP endeavor are set to receive $8.9 million FY 2022 and $9.6 million in FY 2023 will address surface preservation, pavement restoration, or geometric improvement needs for state highways extending through cities.

The agency noted in a statement that cities are required to contribute up to 25 percent of a project’s cost based on its population. However, it emphasized that cities with less than 2,500 in population aren’t required to provide a match.