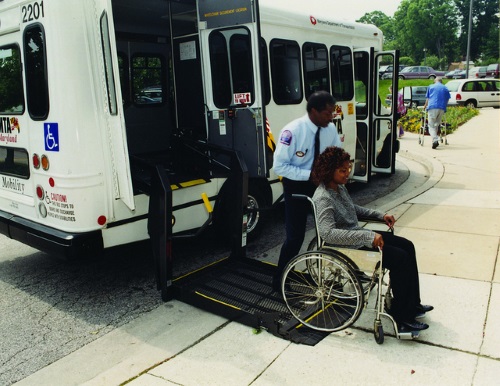 The Americans with Disabilities Act, known simply as the ADA, turned 30 years old on July 26 – a civil rights law that has profoundly affected how many state departments of transportation approach mobility issues.

[Above photo by the Maryland Transit Administration.]

As part of a virtual event celebrating the ADA’s 30th anniversary on July 30, the U.S. Department of Transportation unveiled what it called a “first-of-its-kind” accessibility strategic plan to ensure a “unified vision” and “clear path forward” to continue removing barriers in transportation access for people with disabilities.

That document – expected to be published at the end of 2020 – will include specific goals that will guide USDOT’s accessibility work for the next five years, explained USDOT Secretary Elaine Chao in a statement.

“This strategic plan creates a unified vision to support the development of new inclusive, affordable transportation technologies that address mobility and access challenges,” she said. “We look forward to help usher in a new era of freedom and inclusion and new era of mobility for people with disabilities.”

Sec. Chao added that while accessibility has always been an important priority for USDOT, current accessibility initiatives are spread out through different operating administrations and offices.

That’s why the focus of the agency’s new strategic plan is to provide a single, cohesive roadmap to ensure USDOT is prioritizing and working diligently to increase access to transportation for people with disabilities – and that there are no gaps in that effort, she said.

The creation of the new accessibility plan follows upon an effort launched by USDOT in 2019: a four-year, $40 million program to help develop more “comprehensive, seamless, and efficient transportation solutions” to further foster “increased mobility access” for older adults, people with disabilities, and those living in “underserved communities” in rural and small urban areas.

Transportation has long been linked with the ability to access spaces, making it a critical need to overall quality of life – and the ADA has played a key role over the last three decades opening doors for the 57 million Americans who live with some type of disability.

The conversation surrounding disability rights first started to gain national attention in April 1977 with staged sit-ins to support the signing of the 504 Rehabilitation Act – the biggest disability rights law prior to the ADA. That law prohibited discrimination on the basis of disability in programs that receive funding assistance from the U.S. Department of Education, but while originally signed into law in 1973, the 504 Act regulations were never fully implemented across the country.

Those protests marked the beginning of what would be a long fight between the disability community and transportation agencies and related associations through the 1980s as the ADA began to take shape, as many within the transportation industry were unsure of how much it would cost to make buses and other transit equipment accessible for wheelchair users and those using other mobility aids.

However, passage of the ADA changed that outlook. The American Association of State Highway and Transportation Officials, for example, has made a long-term effort to push accessible design standards in its Design Guide, while the group’s Committee on Civil Rights continues discussing the issue of accessibility.

The public transportation industry in particular has made big strides in making buses, trains, and other modal connections more disability-friendly over the past three decades, as this video produced by the Federal Transit Administration details:

For example, the Oregon Department of Transportation said it has made “steady progress” in bringing the state system up to current ADA standards, with improvements planned for many curb ramps and pedestrian signals to make them ADA-compliant in the next few years.

More importantly, the agency noted that the law influences its traffic engineering approach – particularly where pedestrian crossings are concerned, as a recent video and blog post detailed: