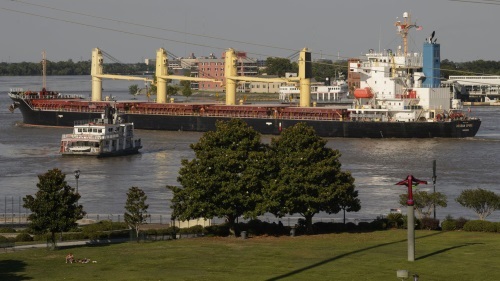 The Louisiana Department of Transportation and Development and the U.S. Army Corps of Engineers will work together on a $250 million project to deepen the lower portion of the Mississippi River from the Gulf of Mexico through Baton Rouge to 50 feet; providing deep draft access to the ports at Plaquemines, New Orleans, South Louisiana and Baton Rouge.

“This is a great day for the people of Louisiana who depend on the Mississippi River for their livelihood,” said Gov. John Bel Edwards (D) in a statement.

“When completed, this project will allow larger vessels that can currently use the widened Panama Canal to reach Louisiana ports as far north as Baton Rouge,” he noted. “It will also allow for some vessels to carry heavier loads. Nationwide, industries that depend on this Mississippi River to move goods will benefit greatly from this dredging project.”

“If we work together with our natural resources and put a multimodal commerce plan in place, the Mississippi River can be an economic super highway and Louisiana can be a leader in global goods movement,” added Shawn Wilson, Ph.D., Louisiana DOTD’s secretary, whose agency is committing $81 million to this dredging effort.

The Mississippi River and its tributaries account for over $750 billion of the nation’s economy and more than 2.4 million jobs, the governor’s office noted – adding that in Louisiana, one in every five jobs is port-related, with the ports comprising almost 23 percent of the dollar amount for the state’s goods and services.

The U.S. Army Corps of Engineers pointed out that adding more river traffic capacity due to the 50-foot depth – five more than what is currently available – translates into greater transportation efficiency and lower costs. It noted that one foot of additional depth allows approximately $1 million in additional cargo to be transported via the river and its inland tributaries.