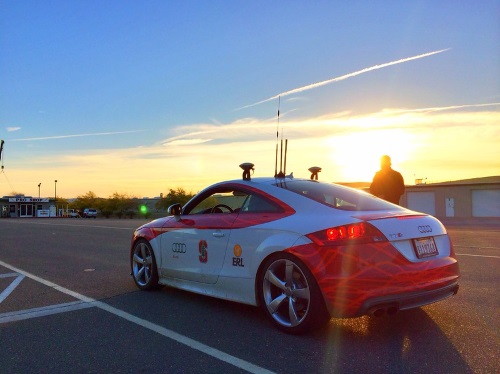 Fully autonomous cars, trucks, and buses that are able to operate across wide geographical areas without drivers, would “revolutionize ground transportation,” according to a new 34-page research brief issued by the Massachusetts Institute of Technology. But deployment of fully autonomous vehicles (AVs) in significant numbers won’t occur for at least another 10 years, it said.

[Above photo by Joseph Thornton.]

MIT’s research brief – entitled Autonomous Vehicles, Mobility, and Employment Policy: The Roads Ahead – explained that “analysis of the best available data” suggests that the “reshaping of mobility” around automation will take more than a decade.

“We expect that fully automated driving will be restricted to limited geographic regions and climates for at least the next decade and that increasingly automated mobility systems will thrive in subsequent decades,” the report said; with winter climates and rural areas experiencing still longer transitions.

MIT’s researchers added that automation in cars “will not occur in isolation,” but within a web of relationships with electrification, connected vehicles, and evolving service models across vehicle types.

“This extended lead time means that policymakers can act now to prepare for and minimize disruptions to the millions of jobs in ground transportation and related industries that are likely to come, while also fostering greater economic opportunity and mitigating environmental impacts by building accessible mobility systems,” they said.

Other key findings from MIT’s research brief include:

State departments of transportation across the country are involved in a variety of efforts to promote AV development – including AV-focused infrastructure projects.

The latest example involves the Hawaii Department of Transportation, which is participating in a four-year, $6 million pilot project headed up by the University of Hawaiʻi at Mānoa in partnership with Econolite, the Federal Highway Administration, and Goldwings Supply.

That project will deploy Vehicle-to-Everything or V2X communication devices on traffic signals at more than 30 intersections along Nimitz Highway and Ala Moana Boulevard. Those devices will collect data on the number, type, and efficiency of vehicles moving through those intersections and

Then, based on that collected data, traffic alerts and other information will be transmitted to the general public via a free mobile application called TravelSafely – available on the App Store and on Google Play.