California Allocates $1.6B for Transportation Projects 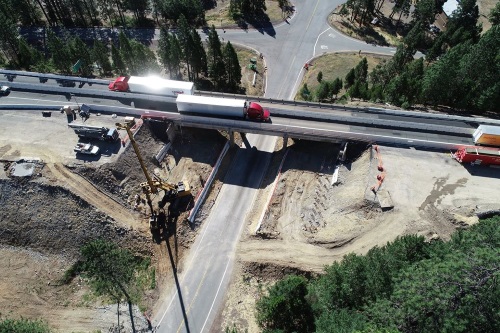 The California Transportation Commission recently allocated more than $1.6 billion to fund a variety of transportation projects across the state, including about $1.3 billion for State Highway Operation and Protection Program projects; a “fix-it-first” program developed by the California Department of Transportation aimed at preserving the condition of the state highway system.

[Above photo by Caltrans District 2.]

“The $1.6 billion allocated will allow the department to continue with critical repairs and upgrades to roads and highways, and will support thousands of jobs that are essential for our economy,” he said.

That includes $77 million for the Trade Corridor Enhancement Program, which is dedicated to projects that enhance the movement of goods along corridors with high freight volume by making improvements to state highways, local roads, freight rail systems, port facilities and truck corridors.

The CTC also gave permission to proceed for nearly $14 million in funding for 17 projects that will improve bicycle and pedestrian overcrossings, repair sidewalks and bike lanes, and provide safer routes to school for children.

Caltrans noted that $1.6 billion funding derives from federal and state gas taxes, including $1.2 billion from Senate Bill 1 – also known as the Road Repair and Accountability Act of 2017.

The state’s portion of SB 1 funds go towards the ongoing maintenance and rehabilitation of the state Highway System. By 2027, Caltrans said those funds will enable it to fix more than 17,000 lane miles of pavement, 500 bridges, 55,000 culverts, and 7,700 traffic operating systems – work that ultimately help reduce highway congestion.