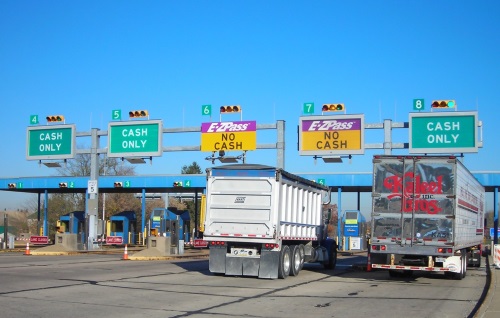 A new report from the International Bridge, Tunnel and Turnpike Association indicates that many of America’s major tolling agencies continue to experience significant revenue impacts due to the ongoing COVID-19 pandemic.

[Above photo by the Pennsylvania Turnpike.]

“Transportation has seen many catastrophic events in our history, from the 1989 Bay Area Earthquake to [the terrorist attacks of] September 11th, and Superstorm Sandy,” Patrick Jones, IBTTA’s executive director and CEO, explained in a statement. “But the ongoing impact of the COVID-19 pandemic on transportation systems across the globe is a different beast altogether.”

Samuel Johnson, IBTTA president and interim CEO of the Transportation Corridor Agencies (TCA) in Irvine, CA, noted that tolled roads, bridges, and tunnels throughout the country witnessed a “dramatic reduction” in traffic over the last five months – and while there’s been a recent increase in volume, projecting when traffic will return to pre-pandemic levels remains “extremely challenging.”

“The pandemic has presented monumental challenges and opportunities in planning for the rebalancing of demand across modes including transit and especially with teleworking achieving recognition as a strong and viable alternative,” Johnson noted. “These changes in mode choice will likely shift over the next couple of years but the tolling industry will continue to be a strong contributor to the movement of goods and people.”

He added that toll road executives from across the country are still suspending capital investments this year and possibly into 2021 due to the revenue declines caused by the COVID-19 pandemic.

Diane Gutierrez-Scaccetti, commissioner of the New Jersey Department of Transportation and second vice president of IBTTA, noted that traffic was down 69 percent on the New Jersey Turnpike and 64 percent lower on the Garden State Parkway in the first week of April compared to the same week in 2019.

“As we started this pandemic, our traffic revenues were down nearly 62 percent. Today, those traffic revenues remain down around 26.7 percent,” noted Mark Compton, CEO of the Pennsylvania Turnpike Commission and first vice president of IBTTA.

“From March through June, [our] turnpike toll revenues have dropped nearly $160 million compared to last year,” he said. “Based on the information we have today, the Turnpike’s revenues may not come back for two years — and traffic may not recover for four to five years. Those projections may change, but today that’s where we stand.”