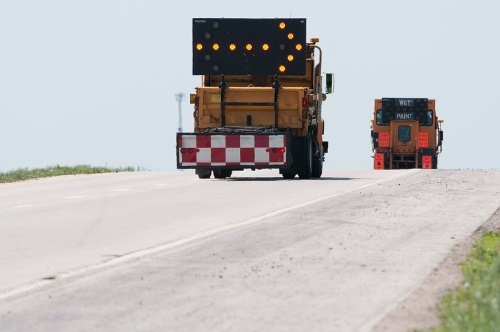 Missouri Department of Transportation is dealing with a surge in work zone crashes despite decreased traffic volumes due to the COVID-19 pandemic – complicating efforts to return the state’s transportation system and economy back to normal.

The agency said it has already had 39 truck- and trailer-mounted attenuators – giant, crushable shock absorbers which absorb momentum and reduce the force of vehicle impacts – hit in work zones this year, compared to 19 hits during the same time period in 2019.

“We’ve had a 100 percent increase in [attenuator] hits at a time when traffic on Missouri roads has decreased by nearly 50 percent for much of the year,” noted Patrick McKenna, MoDOT director, in a statement. “That’s not only an overwhelming figure; it’s also completely avoidable with appropriate driver attention.”

[Editor’s note: McKenna also serves as the American Association of State Highway and Transportation Officials 2019-2020 president and made improving highway safety one of the top “emphasis areas” for his one-year term.]

“Distracted driving has been recognized as a major factor in work zone crashes,” added Nicole Hood, MoDOT’s state highway safety and traffic engineer. “Since 2014, cell phone-related crashes in Missouri have increased by 35 percent. Using a cellphone in a car is potentially one of the most dangerous actions you can take while driving.”

She noted that since 2012, the state’s Slow Down and Move Over law requires motorists to slow down and change lanes when approaching MoDOT vehicles or law enforcement and emergency vehicles with lights flashing.

Failure to do so is a “Class A” misdemeanor and can result in fines and/or imprisonment, Hood pointed out.

To underscore the importance of driving safely in work zones, Governor Mike Parson (R) signed “Lyndon’s Law” in 2019 to revoke the driver’s license of anyone who hits a highway or utility worker in a work zone or an emergency responder in an emergency zone.

Lyndon Ebker, a then 30-year veteran MoDOT employee, died after being hit in a work zone by a distracted driver four years ago.

“Operating a motor vehicle – whether it is an 18-wheel commercial transport or the family sedan – is a full-time job,” emphasized MoDOT’s McKenna said. “Road conditions can change in a heartbeat. We don’t want that heartbeat to be the last; either for you or our workers.”