State DOTs on the Front Lines of Storm Preparations 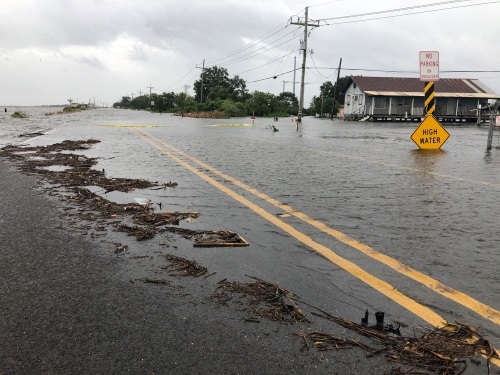 State department of transportation crews along the Gulf Coast undertook a variety of storm preparation activity ahead of the arrival of two major hurricanes this week – highlighting the key ways state DOTs protect critical infrastructure and the residents it serves during severe weather events.

Crews in Texas, Louisiana, and Mississippi cleared storm drains and ditches, lowered light masts, paused highway construction projects, while pre-positioning barricades, signs, and portable dams to prepare for the impact of two hurricanes named Marco and Laura – with the impact of Hurricane Laura on the Louisiana coastline even more damaging than originally predicted.

“We’re treating it just like one big storm,” added Rodney Mallet, communications director for the Louisiana Department of Transportation and Development.

Part of Louisiana’s preparations included removing tolls on the Louisiana Highway 1 Bridge to accommodate a mandatory evacuation of Grand Isle, the state’s only inhabited barrier island. The Louisiana DOTD also pre-positioned dozens of school buses and motor coaches in other vulnerable areas throughout south Louisiana to aid with potential evacuations.

Hurricane Laura affected a broad swath of Louisiana as it came ashore as a Category 4 storm, forcing the Louisiana DOTD to close Interstate 10 in both directions and re-direct evacuees from low-lying coastal areas to U.S 61, I-55, and I-59 and travel north to connect with I-20. The agency also issued an emergency order ahead of the storm.

“We’ve never seen two hurricanes hitting the same state back to back within 48 hours, as is anticipated in the coming days in Louisiana,” noted Governor John Bel Edwards (D) in a statement.

“At the same time, we are responding to the COVID-19 pandemic, which makes the prospect of evacuations, search and rescue and mass sheltering complicated and difficult. We will work alongside our federal and local partners to manage this unique and challenging group of disasters,” he added.

That action protects the controllers from floodwaters, while the controllers “flash mode” helps move potential evacuation traffic better than allowing the signals to run on regular cycles.

That plan uses all northbound and southbound traffic lanes on Interstates 55 and 59 to evacuate the greater New Orleans area into central and north Mississippi.

“Contraflow is a last resort,” explained Sarah Dupre, a public information officer with the Texas Department of Transportation.

“Right now, our crews are preparing for evacuations, and we have dispatched courtesy patrols to help motorists,” she said.

Those three state DOTs also stressed that personnel and equipment must be “pre-staged” in relatively safe locations to respond to the most vulnerable, low-lying areas in the wake of a storm’s passage.

“The most important thing is to make sure our resources are in the right places,” Mississippi DOT’s Roh said. “We’ve been through a number of storms like this, and we know which areas tend to flood, so our first responders are ready to go.”