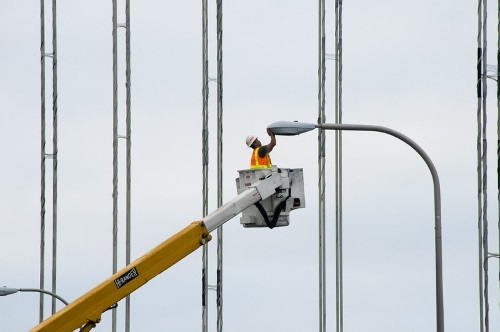 The Oregon Department of Transportation is in the process of converting more than 8,000 high-pressure sodium lights to light emitting diode or LED lights on highways around Region 1 – an area that includes Multnomah, Clackamas, Hood River, and eastern Washington counties.

That change will improve visibility for motorists while saving more than $700,000 annually in lighting costs, the agency said.

The Oregon DOT began this highway light-replacement project in May and said it continue intermittently through the summer of 2021, largely taking place at night to minimize traffic impacts.

The agency added that most high-pressure sodium lights require maintenance every two to four years, while the new LED fixtures need replacing every 15 to 20 years. The longer lifecycle for each LED fixture also means less disruption to traffic created when maintenance workers replace lights, the Oregon DOT noted.

Several other state departments of transportation are involved in similar light replacement projects.

The West Virginia Department of Transportation recently wrapped up a $1.6 million effort to replace highway lights along Interstate 77 in Kanawha County to increase visibility and overall safety for commuters in the area.

Meanwhile, the Virginia Department of Transportation began replacing more than 9,600 highway lights with LED technology this spring as part of plan approved in December 2019; an effort expected to reduce energy consumption by more than 50 percent while tripling expected lifetime for those lights from five to 15 or more years.