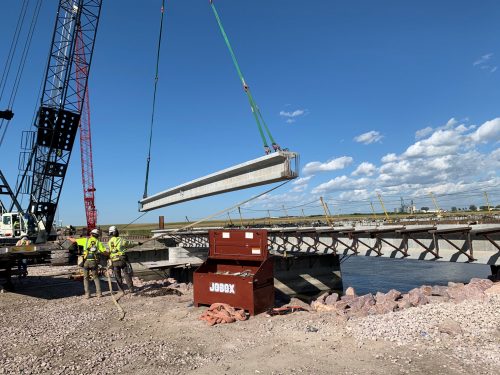 The Federal Highway Administration began redistributing more than $4.76 billion in obligated federal highway funds on August 28. When states or other federal entities funded through the HTF do not fully use those federal funds in a given year, the FHWA makes those funds available to states that have successfully obligated their allotment of federal dollars.

[Above photo by the South Dakota DOT.]

As a result, the FHWA’s redistribution of FY 2020 obligated funding is proving a boon to several state departments of transportation across the country.

The South Dakota Department of Transportation, for one, is receiving an additional $41.5 million in re-distributed federal highway funding, awarded after it met all its fiscal year deadlines for federally funded projects.

“This is the highest amount of additional funding the department has received and is above and beyond the funds the department is allotted through normal distribution of the federal-aid program,” noted Darin Bergquist, South Dakota DOT secretary, in a statement.

“From 2017 through 2019, the department has averaged about $32.4 million per year of redistribution by ensuring our federal transportation program is delivered by letting projects prior to federal deadlines,” he said.

“This money will greatly enhance our overall funding used to build and preserve our states highways and bridges,” he added. “I commend our employees who work diligently to meet project deadlines, allowing us the opportunity to receive these critical federal funds.”