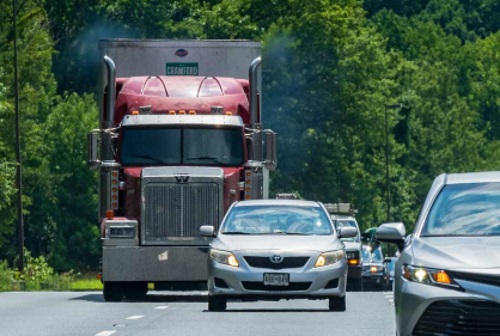 A new study by the Insurance Institute for Highway Safety claims that equipping large trucks with forward collision warning and automatic emergency braking or AEB systems could eliminate more than two out of five crashes in which a large truck rear-ends another vehicle.

The group’s study encompassed some 2,000 crashes that occurred over more than two billion vehicle miles traveled during 2017-19; excluding incidents that did not result in injuries or significant property damage.

Eric Teoh, IIHS director of statistical services, added that the crashes examined in the study involved 62 trucking companies that operated tractor-trailers and other trucks weighing at least 33,000 pounds.

Although large trucks crash less often per mile traveled versus light vehicles such as cars, pickup trucks, and SUVs, IIHS said crashes involving large trucks can be “especially deadly” as they can weigh 20 to 30 times as much as passenger vehicles.

U.S. crashes involving large trucks are up by nearly a third since hitting an all-time low in 2009, the group noted, killing 4,136 people in 2018. Among those fatalities, 119 deaths resulted from large trucks rear-ending passenger vehicles.

The study also indicated that AEB and forward collision warning are both likely to have benefits beyond the reduction in crashes. Even crashes not prevented by either system were made less severe, IIHS said, thanks to a reduction in impact speed.

In reviewing the trucks that rear-ended other vehicles, IIHS’ Teoh found that either system resulted in speed reductions of more than 50 percent between the warning or automatic braking and the impact.