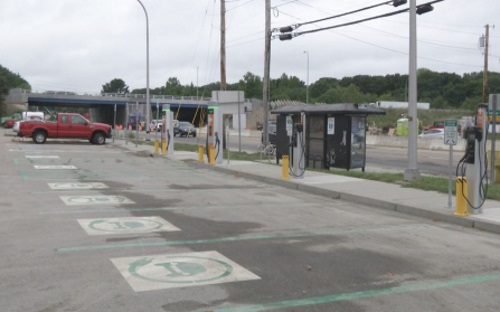 The Rhode Island Department of Transportation will provide free access to electric vehicle (EV) recharging stations situated at two of its park and ride commuter lots as part of a pilot program to encourage and support broader use of EVs across the state.

[Above photo via WJAR.]

The program – operated by the Rhode Island DOT in conjunction with the Rhode Island Office of Energy Resources and National Grid – is offering free EV recharging via those two sites through the end of 2020 in order to evaluate energy “usage patterns” to help plan more recharging system deployments in the future.

“Electric cars are becoming more common on our streets, and the commuter parking lots we own are a perfect test bench for us to evaluate the demand for this service,” noted Peter Alviti, Jr., Rhode Island DOT’s director, in a statement. “There are a number of barriers to electric car adoption, among them concerns about range and access to fast, convenient charging stations. These stations help alleviate those concerns.”

The charging stations – which cost $300,000 – feature 240-volt Level II and direct current fast charging or DCFC options. The agency said Level II chargers provide 25 miles of range per hour of charging, while the DCFC chargers provide approximately 250 miles of range in an hour of charging. Each park and ride lot recharger accommodates up to six cars charging on the Level II chargers and two cars using the DCFC fast chargers, the Rhode Island DOT noted.

The agency added that the Rhode Island Public Transit Authority services both of the lots hosting those rechargers, allowing electric car users to repower their vehicles while using transit service for work or school.

The Rhode Island DOT emphasized that transit users should not use the DCFC fast chargers for extended periods, as they are more suited for use by travelers seeking a brief stop to recharge their vehicles while on long trips.

Analysis conducted by the Idaho National Laboratory using Nissan Leaf all-electric vehicles found that where recharging was fast, public stations were popular – as long as the price to do so is low.