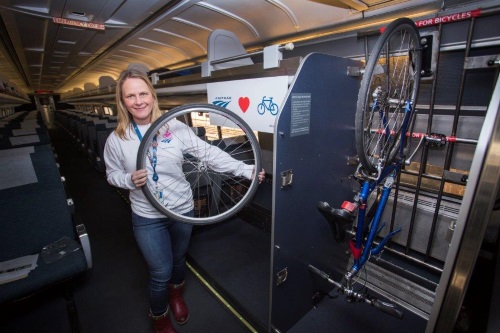 National passenger railroad Amtrak recently expanded its carry-on bike program for most Northeast Regional departures; allowing customers to store their bike inside of the passenger coach in a designated space.

[Above photo by Amtrak.]

“Bringing your bicycle onboard a train is part of the journey, as it allows our customers to explore the cities they are visiting,” explained Roger Harris, Amtrak’s executive vice president and chief marketing and commercial officer, in a statement. “To coincide with the increased popularity of biking in this country, we also wanted to provide our customers with the option of bringing their bike on more trains.”

Using newly installed luggage racks that convert to bike racks, the expanded bike program will allow Amtrak to provide storage space for up to two bikes per departure. Amtrak also allows standard full-size bicycles aboard its trains via this program as long as the front wheel is removed and stored. However, specific reservations are required to carry on full-size bikes, the railroad added.

Amtrak added that more than 232,953 bikes have traveled around the country since it launched the carry-on program in October 2015. The program has also generated more than $1 million in revenue since its inception.