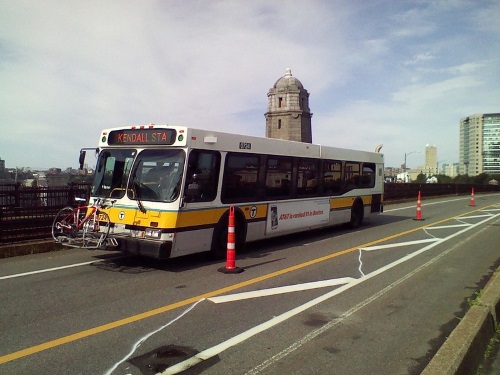 Combined, the participating municipalities in this collective purchasing agreement represent more than one-fifth of the state’s total population and account for most major regional transit corridors in the metropolitan region.

Based on past construction costs across the region and projected project budgets, the MBTA estimates that this joint procurement effort could save taxpayers over $2 million next year, or about 10 percent of what the MBTA plans to spend on the Rapid Response Bus Lanes Program.

The agency also expects additional savings will accrue if they renew the procurement deal in the future and expand it to include more municipalities.

“This is another example of the region working together to move everyone forward. Increasingly, we all need to collaborate in new ways to better serve our riders and constituents,” explained Steve Poftak, MBTA’s general manager, in a statement.

“This agreement will ensure that public agencies like the MBTA will be using their funds as cost effectively as possible, especially throughout the current public health and economic crisis,” he said.

“Establishing more bus and bike lanes is critical for the region as we continue to re-open the economy during this pandemic,” added Eric Bourassa, MAPC’s transportation director. “By reducing costs for the MBTA as well as cities and towns, we can stretch our public dollars further to make public transit and cycling better and safer.”