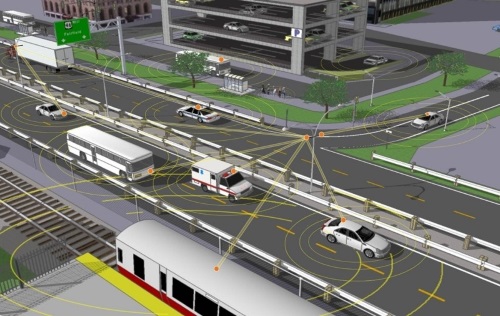 The National Telecommunications and Information Administration (NTIA) encouraged the Federal Communications Commission in a September 8 letter to “expand commercial use” of the 5.9 gigahertz (GHz) wireless communication spectrum band: allowing the 5.9 GHz spectrum to be opened to non-transportation use.

[Above graphic via NHTSA.]

In its letter, NTIA supported the FCC’s proposed rulemaking – issued in 2019 – to open up the lower 45 megahertz of the 5.9 GHz band for unlicensed uses like Wi-Fi, while dedicating the remaining 30 megahertz of the band for use by transportation and vehicle safety-related communication services.

The U.S. Department of Transportation and many other organizations – including the American Association of State Highway and Transportation Officials – oppose the FCC’s proposal to open up the 5.9 GHZ spectrum band, calling it “wrong and misguided” as it would “put future safety and mobility improvements” at risk.

Yet a recent news story stated that NTIA’s recent letter outlining how the FCC’s proposal can accommodate other federal users, though largely radar-based operations, in the 5.9 GHz band may represent a “softening” of intra-governmental opposition to opening up the spectrum to non-transportation use.

That reallocation “would also harm U.S. global competitiveness with respect to next-generation automotive safety technologies,” AASHTO and 40 other signatories explained in the White House letter.

It went on to note that vehicle-to-everything or V2X technologies using that spectrum could eliminate or mitigate the severity of up to 80 percent of non-impaired motor vehicle crashes and 70 percent of crashes involving commercial trucks: saving lives, eliminating injuries, and reducing the $800 billion in annual costs associated with crashes on American roads.