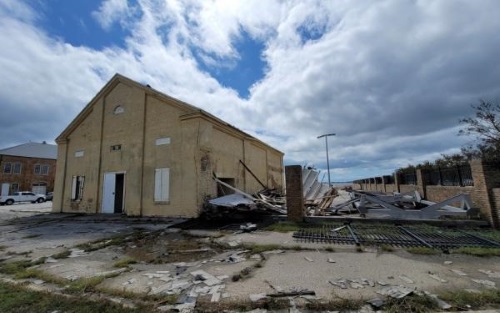 Hurricane Sally made landfall on September 16 near the Alabama and Florida border: a Category 2 storm that trigged “catastrophic flooding,” heavy rainfall, damaging storm surge and strong winds that even affected inland areas across the Southeast in Georgia, the Carolinas, and into Virginia.

[Above photo by the Department of Defense.]

According to news reports, the heaviest rainfall occurred along parts of the Alabama coast and the western Florida Panhandle. The highest measured rainfall total so far is just over two feet at the Pensacola Naval Air Station in Florida.

State department of transportation crews along with National Guard units and other agencies engaged in a variety of rescue, debris clearing, and infrastructure restoration efforts in the wake of Hurricane Sally.

The Federal Emergency Management Agency noted that President Trump has approved emergency declarations for Alabama, Florida, Louisiana and Mississippi to provide federal assistance and coordinate all disaster relief efforts in response to Hurricane Sally across the Gulf Coast.

Those declarations authorize FEMA to provide assistance, including direct federal assistance for emergency protective measures for 30 parishes in Louisiana, 24 counties in Mississippi, 51 counties Alabama, and 7 counties in Florida.