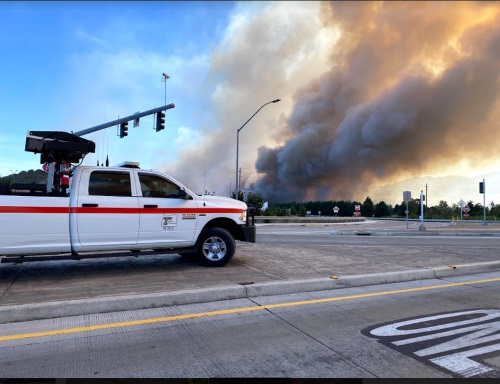 The FHWA issued $5 million in ER funds to the Oregon Department of Transportation on September 16 to cope with damage caused by several large wildfires that started earlier in the month.

Since then, strong winds and hot, dry weather conditions triggered large fires across Oregon with damage to highways, including the widespread destruction of traffic control devices, guardrails, and other hardware – leading to extensive statewide traffic management and road closure operations. Over 200 miles of federal-aid highway system remain closed across the Cascade Mountains, limiting transportation between the Willamette Valley and central Oregon, according to the Oregon DOT.

The agency also put together a video playlist of maintenance crew personnel highlighting the amount of damage caused by the fires.

The Oregon DOT also put together a webpage to provide information on road closures, office shutdowns, and other fire-related information.

“This is such a dynamic and constantly changing situation, we have to make sure these roads are cleared,” explained Luci Moore, the agency’s state maintenance and operations engineer in a statement.

“There are many concerns that we will address. It is likely to be some time before these roads open to full or even partial travel,” Moore added. “Each will be determined individually based on the damages.”

Meanwhile, the FHWA also issued $1.3 million in ER funds to help the Bureau of Land Management and the U.S. Forest Service begin repairs to several bridges and a section of trail damaged by wildfires in California’s Lassen National Forest.

The “Hog” wildfire, which began on July 18, seriously damaged several other roads into and out of the Lassen National Forest, and the Bizz Johnson National Recreational Trail within the BLM’s Eagle Lake district.

The fire damaged seven timber bridges, closing five miles of the 25-mile-long regional trail system that provides further access to other area trails. Repairing these bridges is critical to ensuring access to fire crews who are fighting other wildfires nearby.

Since the beginning of 2020, according to California’s Department of Fire and Forest Protection, some 7,900 wildfires have burned more than 3.4 million acres across the state – roughly 26 times more acreage burned compared to the same period in 2019.

Since mid-August, when the most recent major wildfires began, CalFire said the blazes have caused 25 fatalities and destroyed nearly 5,400 structures. Currently, 17,400 firefighters are battling more than 26 major wildfires across the state.

The Washington Department of Transportation is also dealing with the fallout from a series of destructive wildfires.

The agency noted in a news release that it would close State Route 410 east of Enumclaw for several weeks between mileposts 29 and 43 due to wildfire hot spots, with trees and rocks falling from the burnt slope above the highway.

The wildfire burned and weakened trees and roots, loosening rock and debris from the hillside – causing them to fall to the roadway below, creating unsafe travel conditions for the 14-mile section of SR 410.

Tree removal and rock scaling work will continue before the agency replaces damaged guardrails and reopens the road, WSDOT noted.