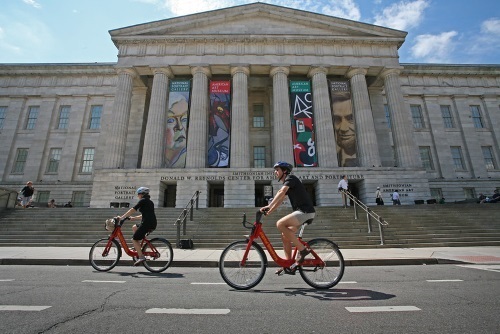 Change is in motion in the nation’s capital to see if two different modes of mobility can co-exist – at least on portions of five residential streets in Washington, D.C.

The District Department of Transportation is launching project to study if bicycles and cars can truly share the road, in part by converting a section of E Street SE into an “advisory bike lane,” which features dedicated bicycle lanes near the curbs that bookend one wide vehicular lane split by a centerline. Car drivers avoid oncoming vehicles by easing to their right into the bike lanes while yielding to the bicyclists.

Advisory bike lanes – deployed for decades in Europe and Canada – tend to work best on low-volume roads that are too narrow for bike lanes but have more than enough width for two travel lanes.

Though usage of advisory bikes lanes in the United States remains rare, many transportation agencies – including state departments of transportation – are experimenting more frequently with them. The city of Portland, Oregon, for example, installed one of the first advisory bike lanes in the country several years ago, as have Minneapolis and Alexandria, Virginia.

“This was part community-driven and part departmentally driven,” explained DDOT’s Will Handsfield, a bicycle program specialist. “As part of our work as planners and engineers, we try to keep our finger on the pulse of things.”

The pulse was rapid in a few neighborhoods, where residents were complaining about speeding cars and the lack of bicycle lanes, which are more in demand since the pandemic.

“We asked DDOT to come up with something for an east-west bike path and to slow down the traffic,” explained Corey Holman, an elected advisory neighborhood commissioner; a post that serves as a liaison between residents and local Washington D.C. officials.

“Will came up with a plan that creates opportunities for people to slow down, maintains parking and gives us a new bike route,” he said. “I think that’s the value of this.”

The one-third mile segment of E Street SE from 11th Street to Potomac Avenue provides an “ideal candidate” to create an advisory bike lane, DDOT noted. At 35 to 40 feet wide, it is too narrow to accommodate on-street parking and dedicated bicycle lanes, while street-side parking spots left two 13-foot travel lanes that encouraged drivers to speed through the residential neighborhood.

The advisory bike lane on E Street SE has only been open since around Labor Day, but Holman said initial neighborhood reaction has been positive. He credited DDOT with “coming up with answers that no one else thought of. DDOT is good at letting their people on the front lines use their creativity to come up with their own solutions.”

DDOT plans to study the performance of its new advisory bike lane installations, monitor how well drivers and bicyclists adjust to the new configurations, then share reports of its observations with the Federal Highway Administration to provide information to other communities considering implementation of such lanes.