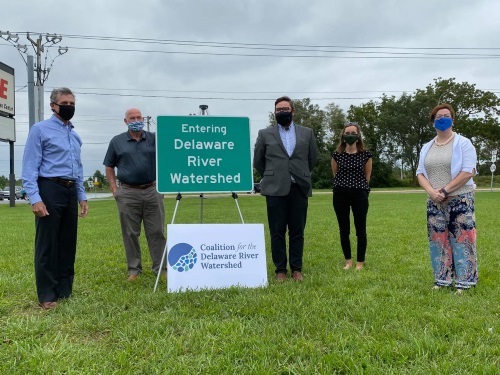 The Delaware Department of Transportation is installing six signs on major state roads to highlight the economic and quality of life benefits of the Delaware River Watershed.

That agency said in a statement that the watershed encompasses four states, beginning in the Catskill Mountains of southeastern New York and flowing downstream past rural, suburban, and urban areas in Pennsylvania, New Jersey, and Delaware.

The Delaware portion of the watershed occupies 965 square miles – roughly half the state’s land area – and is home to more than 643,000 people, roughly74 percent of the state’s population

It also provides drinking water to more than 13 million people – including 725,000 people in Delaware – and provides economic benefits to all four states via recreation, tourism, and trade.

Regionally, the watershed powers a $20 million economy and supports 529,366 direct and indirect jobs and $8.9 billion in wages, while also supporting a “vast community of wildlife” such as migrating red knots, river otters, and blue herons, explained Delaware Governor John Carney (D) who also serves as chair of the Delaware River Basin Commission.

“Millions of people in our region depend on the Delaware River Basin for clean drinking water, and we should protect this resource for future generations,” he said.

“The watershed also remains vitally important for outdoor recreation and economic development for communities in Delaware and beyond,” the governor said. “We will continue to work with states in our region that rely on the Delaware River Watershed to properly manage this valuable resource.”

“We’re appreciative of DelDOT and all of our partners who were part of this collaborative signage process,” added Kelly Knutson, state policy manager at the Coalition for the Delaware River Watershed.

“By bringing awareness of the watershed to residents and visitors, we are creating opportunities for educating and activating people to be stewards of our natural resources,” Knutson said.