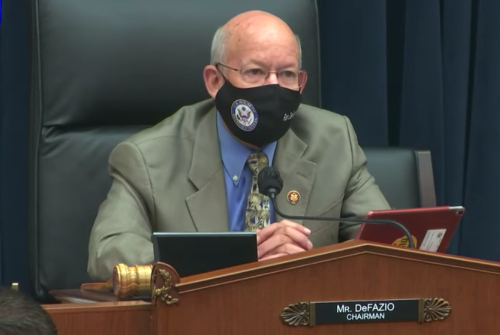 The U.S. Department of Transportation’s Disadvantaged Business Enterprise or DBE program plays a critical role in “leveling the playing field” in the transportation industry for individuals, businesses, and communities of race, color, and gender, according to testimony provided during a House of Representatives Committee on Transportation and Infrastructure hearing on September 23.

[Above photo of Rep. Peter DeFazio, D-Ore., chair of the House T&I Committee.]

“Because of the legacy of inequity in employment and business for minorities within the industry, DBE programs are as relevant today as ever,” explained Sandra Norman, administrator of the civil rights division for the Virginia Department of Transportation in her testimony.

“Our country suffers when talented people who have new ideas and who want to work hard are denied the opportunity to compete because of their ethnic background, race, or gender,” she explained. “This is why there is a continued need for the Disadvantaged Business program to ensure that small business can compete fairly for federal funded transportation related projects.”

Norman noted during the hearing that the DBE program has its roots in the Civil Rights Act of 1964; regulated over the intervening years through a series of legislative initiatives.

She explained that DBE programs apply to airports plus highway and transit transportation projects and were enacted by Congress to address historical discrimination against minority-owned firms in the transportation industry and to ensure that minority and women-owned businesses have a fair opportunity to participate in contracting opportunities made possible by federal financial assistance.

“The majority of employment growth in the United States comes from small businesses,” Norman added. “When small businesses are allowed to do contract work, it is also an opportunity for people who might have been excluded from the relevant workforce to showcase their talents and skills, get trained and work within the transportation industry to have more employment opportunities in the future. Advancing diversity and making money are not conflicting goals; it is good for business and good for society.”

Evalynn Williams – president of Texas-based consulting firm Dikita Enterprises – testified on behalf of the Conference of Minority Transportation Officials and noted that it has become almost impossible for DBE firms to compete with large national and international firms in the transportation sector.

“They have the capacity and depth within their workforce and can pull from global office locations. And over the last 15 years, they have gotten even larger,” she explained in her remarks. “That [is why] reauthorization of the DBE program is so extremely critical. It provides us with opportunities to join a team as a subcontractor, a prime or joint venture partner, which in turn helps to build financial capacity and workforce resources.”

Williams added that, as the CEO of a second generation African American engineering and architectural firm, “we would never have sustained” had it not been for disparity programs such as the federal DBE program.

“Competition for prime contracts with the USDOT, Federal Aviation Administration and Federal Transit Administration is difficult at best, and out of reach for most minority- and women-owned businesses,” she pointed out.

“The truth is, if not for the DBE program, large corporations would not share the work and would self-perform 100 percent of contract-work. [That’s why] being called ‘disadvantaged’ is not a privilege nor does it sound like a goal that a company would strive to be,” Williams stressed. “The reality is, without the program, we would not have a chance at fair competition. It is necessary for the continuing survival of firms such as mine – to feed our families, educate our youth, and build our communities.”