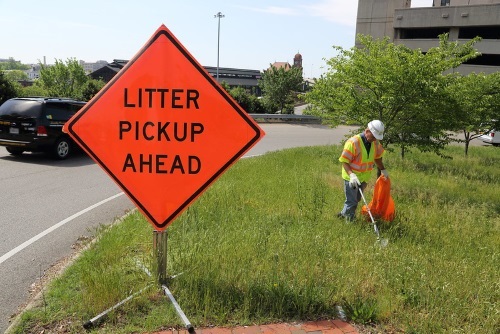 The Virginia Department of Transportation recently launched Virginia is for Lovers, Not Litter – a public outreach campaign aimed at raising awareness about Virginia’s roadway litter problem.

The agency noted that its spends nearly $3.5 million annually to remove litter from Virginia’s roadways, with more than half of that litter coming from motorists with another 25 percent from pedestrians.

“This campaign is yet another important step in Virginia’s transportation sector to promote environmental stewardship,” noted Shannon Valentine, Virginia’s secretary of transportation, in a statement.

“Through his campaign, we are emphasizing the responsibility each of us has to respect and protect the public spaces we share,” she said.

“Virginia DOT and our partners across the state are committed to promoting ways to reduce litter,” added Rob Cary, Virginia DOT’s chief deputy commissioner and chair of the newly formed Environmental Subcommittee of the Commonwealth Transportation Board.

“Having litter-free highways is something we should all be working toward. The first step is to ensure everyone recognizes the role they can play in preserving the beauty of our Commonwealth, which should change the mindset of littering on our roadways,” he said.

Cary noted that roadway litter negatively affects the environment and the state economy; impacting “our quality of life, safety, economic development, and recruitment of businesses and families to the Commonwealth.”

Several state departments of transportation have ramped up litter campaigns in recent months.

The Alabama Department of Transportation initiated an anti-litter campaign entitled “Trash Costs Cash” in early August. That campaign uses television, radio stations, and social media sites such as Facebook and YouTube to highlight a major increase in litter fines and penalties authorized by the state legislature in 2019.

The California Department of Transportation and the California Highway Patrol resumed litter removal on state highways in mid-June; cleanup activity that has been limited since March due to the COVID-19 pandemic.

“Litter increases the risk of fire, pollutes our waterways, threatens wildlife and costs taxpayers millions of dollars to remove,” explained Toks Omishakin, director of Caltrans, in a statement. “We ask all Californians to be part of the solution, dispose of trash responsibly and secure cargo loads before getting on the road.”