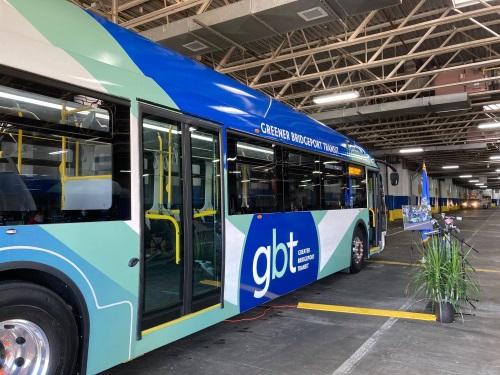 The Connecticut Department of Transportation, along with the Connecticut Department of Energy and Environmental Protection, and Greater Bridgeport Transit, officially unveiled the state’s first two battery-electric transit buses on September 28 – part of a “gradual transition” to a statewide all-electric transit bus fleet that will improve the rider experience and air quality while reducing noise levels.

It is also part of a broader effort Connecticut, the District of Columbia, and 14 other states agreed to in a joint memorandum of understanding or MOU issued in July. That MOU commits them to advance and accelerate the market for electric medium- and heavy-duty vehicles, including large pickup trucks and vans, delivery trucks, box trucks, school and transit buses, and long-haul delivery trucks.

“This program illustrates our commitment not only to public transportation and the thousands of Connecticut citizens who rely on it every day, but also to the environment,” said Governor Ned Lamont (D) in a statement. “This green technology is state-of-the-art and will serve us for years to come with clean, safe, reliable service, which is the best way to get people out of their cars and onto buses and trains.”

The Connecticut DOT said these two all-electric transit buses are the first of up to five, 40-foot battery-powered buses and associated charging infrastructure that will eventually be deployed at GBT. Highlights of the buses include quiet operation, carbon-fiber-reinforced composite bodies, and anticipated reduced operating costs due to approximately 30 percent fewer parts than an internal combustion engine.

The agency also recently received a $6.7 million Federal Transit Administration grant to modernize its CTtransit Stamford bus maintenance facility. The Connecticut DOT is also purchasing twelve electric buses for CTtransit Hartford and CTtransit New Haven service areas to be deployed over the next 12 to 18 months.

“CTDOT has a long history of welcoming technology innovation in providing bus service to the state, including demonstrating hybrid diesel-electric buses 15 years ago, which led to the integration of the technology in our fleet,” noted Joseph Giulietti, Connecticut DOT’s commissioner.

“We also instituted fuel cell buses in the Hartford area in 2007 and 2010. We are taking every step possible to reduce our carbon footprint and improve air quality in the communities we serve,” he said.

NYSDOT Ahead of Schedule on Multimodal Project