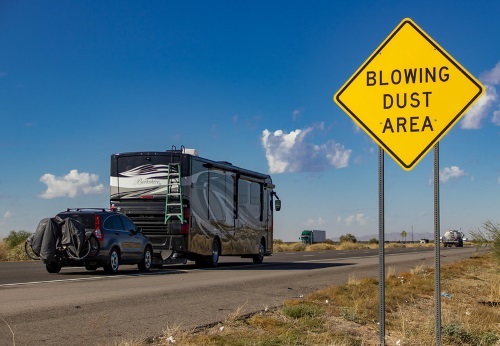 “Safety is the number one priority for the Arizona Department of Transportation and we rely very heavily on great partners like the National Weather Service,” added Brent Cain, Arizona DOT’s transportation systems and management operations director.

“Arizona weather can range from temperatures in the 80s in one part of the state to snow in another, sometimes on the same day,” he pointed out. “Without our relationship with the National Weather Service, it would be difficult to effectively meet the safety needs of the public. We’re grateful for this recognition.”

The agency noted that it works with NWS offices in Phoenix, Tucson, Flagstaff and Las Vegas to monitor a wide range of weather activity, including heat events, major winter storms, monsoon storms that can produce deadly lightning and flash flooding, the effects of wildfires, high winds and other occurrences throughout Arizona.

As central Arizona is a prime location for dust storms, the Arizona DOT installed a dust storm detection system in 2019 on portions of Interstate 10 between Phoenix and Tucson, as well as variable speed limit signs that adjust in response to poor weather such as dust storms or heavy rainfall.

The agency also coordinates with the NWS on an emergency action plan to respond quickly to flooding emergencies, especially in areas burned out by wildfires where flooding can be more severe.

Streamlined communication and preventative measures as part of the federal Pathfinder Program also allows maintenance crews to take quick action to close highways and keep drivers safe in the event of flooding.