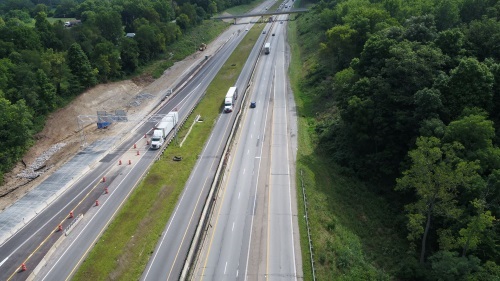 The Ohio Department of Transportation is collaborating with the Ohio State Highway Patrol (OSHP) to improve work zone safety via a new aerial enforcement program.

Ohio State Troopers with the OSHP Aviation Section will cover nearly a dozen highway work zones with the Ohio DOT’s help – targeting crash-causing violations like speed, following too close, and failure to move over.

The Ohio DOT it selected those specific work zone locations due to a history of crashes, higher speeds and the type of barrier used to separate traffic from workers.

OSHP said it routinely enforces speeding violations from the air across the state; measuring speed by how long it takes a vehicle to pass between a series of lines painted on the roadway. The violation time and speed information is then relayed to a trooper on the ground who makes the traffic stop.

The Ohio DOT has installed highway signs to alert drivers about the aerial work zone enforcement effort and that plans are in the works to expand the program in 2021 depending on the results from this joint pilot program.

“This year, we have seen an alarming spike in crashes on our roadways and construction zones,” said Governor Mike DeWine (R), noting that 6,533 work zone crashes occurred statewide in 2019. As of September 21, there have been 3,145 work zone-related crashes in Ohio in 2020.

“It’s important that we implement partnerships and technology like this to decrease roadway crashes, ensuring both motorists and construction employees make it home safely,” he added in a statement.

“Driving requires your full attention, especially in work zones,” emphasized Jack Marchbanks, Ohio DOT’s director. “All the safety measures we put into place don’t matter if drivers never see them because their attention is elsewhere.”

State DOTs are putting more focus on work zone safety lately due to an uptick in speeding-related incidents related in part to the low traffic volumes caused by the response to the COVID-19 pandemic.

For example, the Michigan Department of Transportation recently noted that while there may be fewer motorists on the roads, the number of road and work zone fatalities are rising – with the agency grappling with an increase in crashes and fatalities despite a 20 percent decrease in overall statewide traffic volumes due to the ongoing COVID-19 pandemic.

The agency said in a statement that through September some 730 people have died on Michigan roads: an increase of 58 deaths compared to the same period in 2019. It added that three on-the-job road workers were struck by speeding vehicles in September alone, killing two of them.

On September 21, a vehicle hit and killed Zachery Morisette – a 26-year old Macomb County Department of Roads employee – while replacing a manhole cover on I-94 near 9 Mile Road in Macomb County.

The, on September 24, a vehicle struck and killed Jeremy Zeitz – a 40-year old road worker from Gladwin – in a Sherwood Highway work zone over I-69 in Eaton County.

“We are deeply saddened by these recent road worker fatalities. These workers had families and friends who loved and will miss them immensely,” noted Paul Ajegba, Michigan DOT’s director, in a statement.

“As we begin our Rebuilding Michigan bonding program aimed at catching up with years of our state’s underinvestment in roads, you can expect a great deal of work on highways across the state,” he added. “We implore you to slow down and drive through work zones as if it was your own workplace.”

That project – involving Audi of America, American Tower Corporation, Qualcomm Technologies, and the Virginia Department of Transportation – will broadcast work zone awareness messages via low-latency direct communications yet also warn roadside and maintenance personnel that a vehicle is approaching via C-V2X-enabled vests.

The Virginia pilot project is equipping roadside workers with C-V2X vests and using Audi Q8 test vehicles specially equipped with a Qualcomm C-V2X-based platform, to deliver warnings and alerts to drivers and personnel about each other’s presence.

“[We are] excited to support the further exploration of C-V2X technology, deployed both in vehicles and in infrastructure,” explained Cathy McGhee, Virginia’s director of transportation research and innovation, in a statement.

“We continually seek opportunities to apply technology in ways that provide safety and mobility benefits for Virginia roadway users and joint efforts like this are incredibly valuable,” she added.