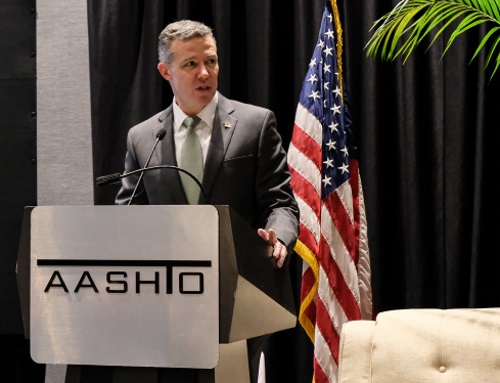 The American Association of State Highway and Transportation Officials renewed its call for $37 billion in emergency funding for state departments of transportation across the country in an October 5 letter to Congressional leadership.

“This crucial federal backstop will prevent cancellations and delays of vital transportation projects as well as potential job losses both in the state DOT workforce and the private sector,” explained Jim Tymon (seen above), AASHTO’s executive director, in the letter.

“And just as important, this federal funding can also jump-start much needed economic activity as the United States continues to recover from the effects of the [COVID-19] pandemic,” he added.

Since the beginning of the pandemic in March, state DOTs suffered and continue to suffer severe losses in dedicated user fee revenues, including motor fuel taxes.

While AASHTO said the near-term financial need for state DOTs remains the same for fiscal year 2020 – roughly $16 billion – data compiled over the last several months indicates state transportation revenues will not fall quite as much over the longer-term as initially projected at the beginning of the COVID-19 outbreak.

Still, AASHTO indicated that the revenue overall recovery period for state transportation revenues will now take longer than expected – roughly five years, according to its most recent projections.

“These transportation-specific revenues are outside of a state’s general fund and comprise the foundation of every statewide transportation investment program,” Tymon stressed in the letter.

“With the prolonged erosion of state transportation revenues, the ability of state DOTs to carry out their core functions such as delivering capital and construction programs, safely operating their transportation systems, maintaining a state of good repair, and meeting payroll and administrative needs remain threatened,” he said.